European Court: Fleeing Dangerous Countries a Ground for Asylum | Europe | News and current affairs from around the continent | DW | 18.02.2009

People fleeing from violence and seeking safety in the European Union do not have to prove that their lives are under personal threat if they come from a dangerous enough country, the EU's highest court has ruled. 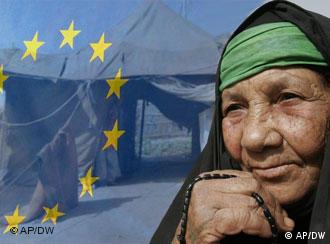 Deciding which countries qualify as "dangerous" will be left up to individual European states, the European Court of Justice (ECJ) ruled on Tuesday, Feb. 17.

The ruling concerns Iraqi couple Meki and Noor Elgafaji, who in December 2006 applied for temporary residence permits in the Netherlands. The Elgafajis said that their lives would be in danger if they stayed in Iraq. The Dutch justice ministry refused the application, saying that the couple had not proved that they would face a "serious and personal" threat if they returned home. The couple appealed that decision in the Dutch courts, which asked the ECJ for advice.

The ECJ decided that, under EU rules, people seeking the right to live in Europe because they fear death at home do not have to prove that they, personally, are under threat of targeted violence, if the country itself is seen as sufficiently dangerous.

Under exceptional circumstances, civilians can be allowed to stay in Europe because there is so much indiscriminate violence in their homeland that they would be in danger if they stayed, the court said.

However, it was up to EU member states to decide when those exceptional circumstances applied, it said.

The EU is currently trying to build a common asylum policy, but is hampered by deep divisions between member states on the questions of who should qualify for protected status and how they should be treated.

On Wednesday, the EU's executive, the European Commission, is set to propose the creation of an EU-wide asylum support office to help member states coordinate their approaches.

Munich's municipal council is backing a motion submitted by the Green party to host 17 members of the Chinese minority held at Guantanamo Bay. The controversial offer still has to be approved by the Chancellor. (06.02.2009)

More than 1,000 asylum-seekers and would-be immigrants broke out of an Italian refugee center on the island of Lampedusa on Saturday, Jan 24. Conditions at the center have been criticized by the UN and Germany. (24.01.2009)

For many, the Marienfelde Refugee Center in Berlin was a first stop-off point, a place where people could prepare for a new life in the West after turning their backs on Communist Eastern Europe during the Cold War. (02.01.2009)