Star gazers have discovered 32 new planets orbiting stars outside of our solar system. Many are relatively small and could harbor conditions that would allow for life forms. 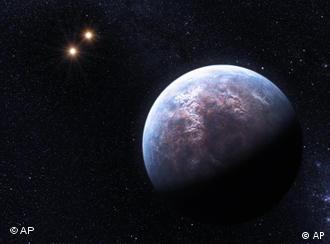 Researchers said life is a possibility, but has not yet been found

Some of the 32 newly discovered planets are just a few times larger than Earth. The astronomers said this increases the possibility that conditions on them could give rise to life.

Researchers announced their findings on Monday, October 19, at a conference in Porto, Portugal. They said the discovery could mean that 40 percent or more of Sun-like stars have such planets - so-called exoplanets - in orbit around them.

Stephane Udry of the Geneva Observatory in Switzerland said the recent discovery brings the total number of known exoplanets up to 400.

Most of these are giant balls of toxic gas, which are unsuitable for life as we know it. However, 28 are so-called "super-Earths," with masses 20 times the size of Earth or less, which means they could be rocky instead of gaseous, the European Southern Observatory (ESO) said in a statement.

"Nature doesn't like a vacuum, so if there is space to put a planet it will put a planet there," Udry told reporters in Porto.

None of the newly found exoplanets are Earth-like, said the researchers. However, whether any of them could be home to carbon-based life forms would depend on where they orbit in relation to their stars.

Earth itself is located in a zone where the temperature is "just right" - neither too hot for our atmosphere to be stripped away, nor too cold for seas to freeze. It can therefore contain liquid water - the stuff of life.

The discovery of the 32 planets was made using HARPS - the High Accuracy Radial Velocity Planet Searcher - which is a spectograph attached to ESO's 3.6-meter (11.8-foot) telescope located in La Silla, Chile. The planets are too small to be seen directly, but scientists are able to calculate their size and mass by measuring the gravitational impact they have on the stars they orbit.

HARPS was developed by experts from the Geneva Conversatory and is the most successful planet spotter, having detected 75 of the 400 known exoplanets.

In the two years since the French made their top-secret UFO files public, more European nations have declassified documents. But the majority remain tight-lipped with a few refusing to even acknowledge the phenomenon. (13.10.2009)

NASA crashes rockets into moon's surface in search of water

Researchers have staged a lunar collision in an attempt to discover water sources on the moon. Their costly experiment could have important international ramifications for space exploration. (09.10.2009)

A German government official has called for the country to launch an unmanned mission to the moon by 2015. The project would boost research, but currently there's hardly the money for such high-flying ventures. (12.08.2009)