At the 48th Munich Security Conference, starting February 3, global leaders and generals will tackle Europe's relationship with Asia and the impact of the Arab Spring. DW spoke with Chairman Wolfgang Ischinger. 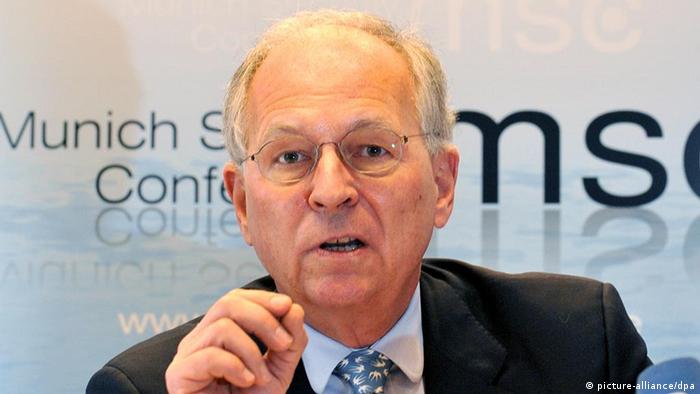 Europe shouldn't get left behind in Asia, says Ischinger

Wolfgang Ischinger has been chairman of the Munich Security Conference since 2008. The diplomat was Germany's ambassador to the US from 2001-2006 and to the UK for two years after that. He also worked on the 1995 Dayton peace accord for Bosnia-Herzegovina.

DW: What are the crucial issues this year for the Munich Security Conference?

I'll start with the situation in the Arab World. Last year, events were unfolding in Egypt at the time of the conference, so we weren't yet able to discuss them properly with the relevant leaders. We'll definitely catch up on that this year. We will have leaders from Tunisia, Qatar as well as Libya and Egypt at the conference to talk about the opportunities, hopes but also the dangers of the recent developments. That, of course, includes the situation in Syria and the Iranian nuclear program.

What else are you going to discuss?

One crucial issue are the global shifts of power, triggered by the new American focus on the Pacific region in terms of foreign and security policy, and what that means for Europe. We will discuss this with our American friends, with representatives from the Chinese, Indian and Australian governments also included in those discussions.

It's no secret that many are worried that America's tight and organic relationship with Europe is taking a back seat, and that can't be in the interests of Europe, and we also need to ask the question what that means for the cooperation in NATO.

Does the eurozone's financial crisis present an opportunity for European nations to intensify defense cooperation?

Yes, it's a wake-up call for Europe, to check to what extent they can pool their resources and be more efficient without spending more money. To ensure stability in Europe, as well as elsewhere, we need sufficient resources, and we fear that there'll certainly be less of those in future.

The new US policy in the Pacific has not gone unnoticed by Beijing. In November, the Munich Security Conference sent a delegation to China. Is the conference trying to act as a builder of bridges between China and the US?

That might be a bit of a challenge for us. But, given the rapidly changing Asia policy in the US, we don't want Europe to get left behind and that's what we need to work on. Europe must not just focus on selling technology and cars to the Far East and the rest of Asia, it also needs to offer itself as a stable political partner.

We need a European Asia policy. Of course, we need to talk this through with our transatlantic partners. An active European Asia policy could help prevent a scenario, where the US would put too much emphasis on military threats instead of looking at China as a political and economic partner.

Traditionally, one of your main concerns has been security cooperation with Russia. There's not been much progress since the ratification of START.

Yes, I agree with the many experts that we have reached a kind of stalemate in the negotiations between the US, NATO and Russia with regards to the talks on missile defense. That's why we'll present the findings of a working group made up of Russian, American and European experts who, for the last two years, have been working on concrete proposals on this topic. I hope that, come the next NATO summit in May, the report can be used to achieve a more regular exchange between NATO and Russia.

Is Germany's leading role in the fight against the eurozone's debt crisis an issue at the conference?

Many of the participants from China, Japan, the US and Brazil are hoping to gain more of an insight into how Germany plans to deal with the situation in Europe, and also how our partners are dealing with Germany's uniquely powerful position in Europe. We didn't strive for this role, it just fell into our lap.

Right at the start of the conference, we will talk about this with Polish Foreign Minister [Radek] Sikorski. Last December, he held an interesting speech, essentially saying that he, as Polish foreign minister, was more worried about Germany not leading than about Germany taking the lead. I thought that was extraordinary given German-Polish history in the last century.

As part of the United States' long-term plans to cut nearly half a trillion dollars from defense spending, the Pentagon has announced a proposed budget for 2013 that is lower than the budget approved for this year. (27.01.2012)

Russian threats 'will not deter' US and NATO missile shield

Through geopolitical posturing reminiscent of the Cold War, Russia has threatened to station missiles on the EU's borders if the US and NATO do not respect its security concerns over the construction of a missile shield. (23.11.2011)

In light of Russia's invasion of Ukraine, conservative Japanese MPs are pushing for the country to move further away from its pacifist principles, towards greater defense spending and counterstrike capabilities.

Munich Security Report: A grim analysis of a wave of global crises 14.02.2022