After Borussia Dortmund's win earlier in the night, there was mixed fortunes for the two other German sides. Schalke was comfortable 3-0 winners in Cyprus, while Augsburg turned in a battling display at Athletic Bilbao. 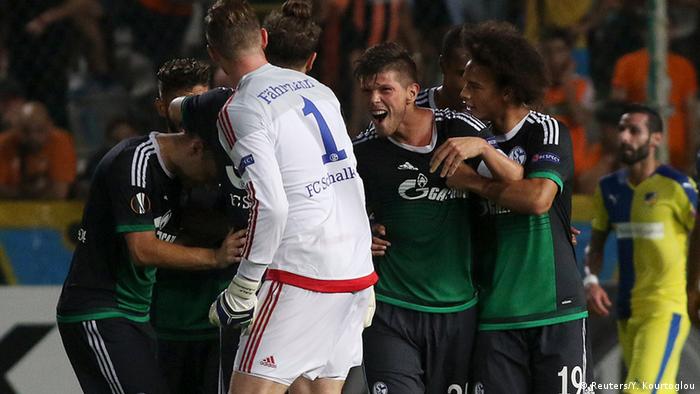 Schalke picked up three points in their first UEFA Europa League outing of the season with a 3-0 defeat of Cypriot side APOEL Nicosia.

Klaas-Jan Huntelaar scored two goals either side of the break for the Royal Blues, while Joel Matip found the net to open the scoring early on. Andre Breitenreiter's men have enough motivation to become the first German club to win the tournament since Schalke beat Inter Milan on penalties in 1997.

After a slow start to proceedings, teenage prodigy Max Meyer blasted a long-ranger against the crossbar in the eighth minute. A quarter of an hour later, Johannes Geis tried the same feat, but saw his 30-yard strike cannon against the top of the crossbar.

Five minutes later, Geis turned creator. The former Mainz midfielder sent in a super set-piece delivery for defender Matip to nod the ball on and beat the keeper Boy Waterman. Adding more to his already aggressive game, the midfielder's intensity with and without the ball sets a standard for his teammates to follow.

Nine minutes before the interval, Huntelaar turned shaprly into space and then drilled his 30-yard strike into the bottom corner. Waterman should have reacted quicker, but the Dutch striker's only instinct was to shoot for goal.

With Temuri Ketsbaia the club's fourth coach of 2015, APOEL Nicosia's preparations for the Europa League are hardly in check. The Georgian coach saw his side look threatening in a handful of situations against an overall dominant Schalke team.

Leon Goretzka had a goal ruled out for offside midway through the half before Huntelaar added his second of the evening on 75 minutes to secure three points for the Royal Blues. The Schalke striker now has 12 goals in the UEFA Europa League - excluding qualifiers - in 11 matches. 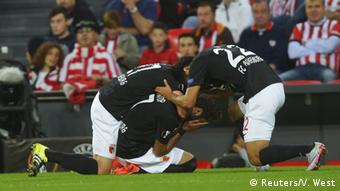 Altintop returns to the side and scores Augsburg's first European goal

Elsewhere, Aritz Aduriz scored two goals in 11 minutes to sink a resilient FC Augsburg who were competing in European competition for the first time.

The Bavarians took the lead after 15 minutes when Halil Altintop scored from close range, the just rewards for an outstanding first half display. The attacking-midfielder was one of three players back in the side following a 2-1 defeat at Bayern Munich on Saturday.

Altintop partnered Tim Matavz in attack, the attacking-midfielder getting the break of the loose ball before lashing home the club's first-ever goal in European competition. If it wasn't for the performance of Bilbao keeper Herrerin, the German side should have gone into the break with a two-or-three goal advantage.

But on 55 minutes, Aduriz headed in from a textbook set-piece move, which involved some blocking of Augsburg defenders. Sporting director Stefan Reuter pointed the next 11 minutes out to be the turning point in the match. Augsburg couldn't get a second despite several chances.

Veteran striker Aduriz then blasted in his second to knock the stuffing out of the visitors with 66 minutes on the clock. Bilbao punished some poor defending - and more poor finishing - in injury time when captain Markel Susaeta scored his first goal in the Europa League this season to make it 3-1.

Meanwhile, Son Heung-Min scored two goals on his European debut for Tottenham as the North London side beat Qarabag 3-1. The club from Azerbaijan took the lead from the penalty spot before the South Korean sweeped home from close range to bag his first for the club.

The former Leverkusen and Hamburg ace rounded off a good move two minutes later, while Erik Lamela added a third for the Premier League side.

Earlier in the evening, Liverpool were held to a 1-1 draw by French side Bordeaux, while ten-man Celtic salvaged a point against Ajax in Amsterdam. Perhaps the surprise result of the evening was Turkish giants Fenerbahce going down 3-1 at home to Molde.