Austrian forward Marko Arnautovic has been handed a one-game ban by UEFA for an anti-Albanian slur he allegedly directed at a North Macedonia player. Arnautovic, of Serbian descent, denies any racist intentions. 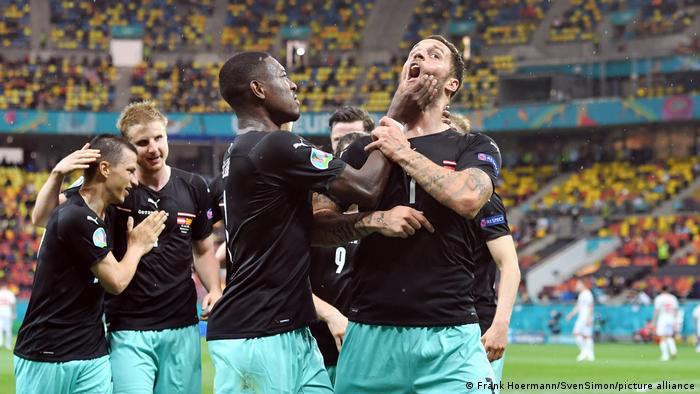 Marko Arnautovic will miss Austria's crunch game against the Netherlands on June 17 after his heated celebration following his goal against North Macedonia on Sunday.

On Wednesday, UEFA released a statement finding Arnautovic guilty of insulting an unspecified North Macedonian player and confirmed his punishment.

"The UEFA Appeals Body has decided to suspend Austrian Football Association player, Marko Arnautovic, for the next (1) UEFA representative team competition match for which he would be otherwise eligible, for insulting another player," the statement reads.

The Football Federation of Macedonia had appealed to UEFA to punish the 32-year-old forward for his outburst, which has been described as a racial slur, specifically anti-Albanian in nature.

Arnautovic was reprimanded by Austria captain David Alaba on the field for his conduct.

Alioski was born in North Macedonia to Albanian parents and when he was young moved to Switzerland, where approximately 250,000 ethnic Albanians currently reside, making it the second-highest ethnic group in Switzerland. Alioski and Arnautovic also had an exchange in German after the game.

Arnautovic has escaped a 10-game suspension, which would accompany the use of racist language.

Arnautovic is also believed to have been irritated that he was a substitute and has apologized on social media for his conduct and the "heated words" used but has rejected any suggestion that it was racist.

"I would like to say one thing very clearly. I AM NOT A RACIST! I have friends in almost every country and I stand for diversity. Everyone who knows me is aware of that."

Serbia, the country of birth of Arnautovic's father, has historic tensions with Albania and North Macedonia, and spats between players of these nations is nothing new.

In the 2018 World Cup, Granit Xhaka and Xherdan Shaqiri, Swiss players with Albanian backgrounds, were fined for their "Albanian Eagle" celebration aimed at Serbian fans following Switzerland's game against Serbia.

Arnautovic will be free to return for Austria's final group game against the Ukraine on June 21.