The Icelanders have been the story of the tournament. 99.8 percent of Icelanders watched them beat England but that's not the only way in which the country is exceptional. Here are the stats behind their rise. 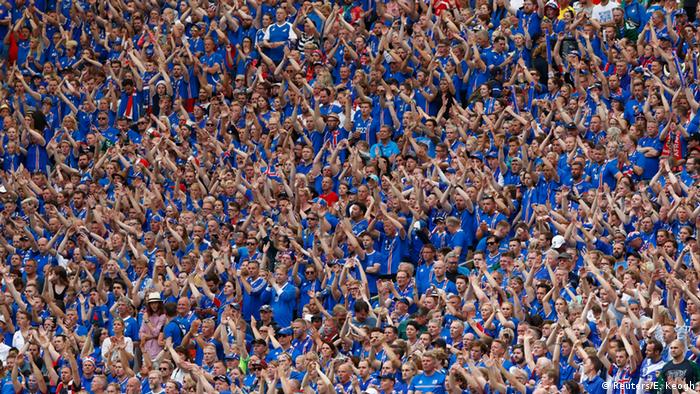 Since 2002, Iceland's football association (KSI) has overhauled the country's infrastructure and coaching methods. Previously, coaches had to travel to England in order to get their UEFA licenses, but that has changed, with the focus now on increasing the home-grown coaching talent pool.

Nowadays, UEFA courses are being run locally in the Icelandic capital, Reykjavik. The result is more than 800 coaches with UEFA licenses - and 185 of those hold the prestigious A license. In a country of 330,000, this means a ratio of one A-licensed coach per 1,793 people. In contrast, England, who has lost to Iceland in Tuesday's last-16 match, has an A licensed coach for every 44,537 people.

But coaching is just one part of the puzzle. According to FIFA's latest report, the country has 21,508 active football players, meaning one in every 15 people in the island plays football in some capacity.

With so many football players, it is only natural that attendances in the country are also representative of a country that loves the game. According to European Football Statistics (EFS), the top tier of Icelandic football has had an average attendance of 1,107 in 2015/16. That doesn't sound like much, but it means that at least one in every 300 Icelanders is attending a football match on a regular basis. In Germany, where the average attendance of 43,300 fans is the highest in Europe, it stands at one per 1,861 people.

A combination of these factors has resulted in a staggering rise up the FIFA rankings. Just six years ago, Iceland was the 112th best team in the world. They now sit 34th, and can expect to shoot up even further following their impressive campaign so far.

The country's investment and planning is already bearing fruit in Euro 2016. Iceland is the joint-third highest scoring team in the competition with six goals, even though it has the fifth lowest number of goalscoring attempts (29). This equates to a shot conversion rate of 21 percent.

As a point of comparison, the top scoring side to date is Belgium, who have found the net eight times from 84 attempts (nine percent). What makes this goalscoring record all the more remarkable is the fact that Iceland averages 35 percent of ball possession, the lowest in the tournament. It's also bottom of the table when it comes to completed passes with 655, and is the owner of the second-lowest pass completion rate (71 percent).

It may not be pretty, but Icelanders clearly don't mind. Swedish media outlet Aftonbladet has claimed that Iceland's last-16 match against England had a whopping 99.8 percent TV rating, which means the entire population had watched the game, bar 650 people.