Marine Le Pen's far-right National Front party is leading in the European Parliament elections in France, according to early projections. Results from across the 28-member bloc are coming in throughout the the evening. 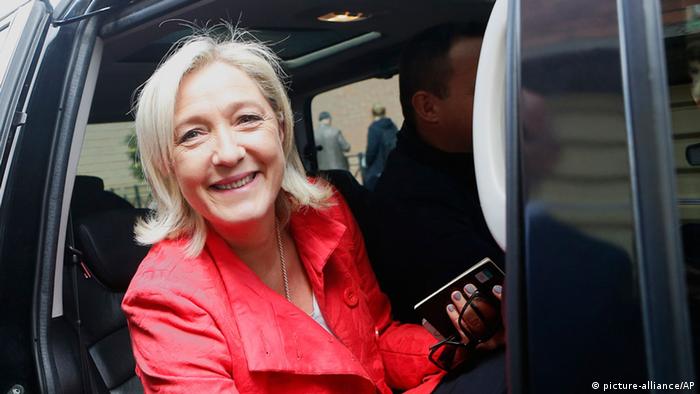 The center-right opposition Union for a Popular Movement (UMP), meanwhile, had 21 percent of the vote. The ruling Socialist party of President Francois Hollande was trailing in third place with between 14.1 and 14.7 percent.

Heading into the elections, the continent's euroskeptic parties were expected to fare well amid the backdrop of the euro crisis and subsequent austerity measures imposed by Brussels.

The first projections out of Greece had the country's anti-austerity radical leftist party Syriza leading the polls with around 26-28 percent of the vote. The radical right "Golden Dawn" party, meanwhile, had around 8 to 10 percent.

According to early projections in Austria, the far-right FPÖ saw strong gains at 20 percent, compared to the 7.3 percent they garnered in 2009.

TV exit polls in Denmark say the anti-immigration Danish People's Party is set to take the biggest share of the Danish vote.

German projections showed Chancellor Angela Merkel's conservative CDU/CSU party leading in the European elections with 36.1 percent of the vote, ahead of their center-left junior coalition partners the SPD at 27.6 percent. The Green party was at 10.9 percent, the Left party at 7.8 percent and the euroskeptic AfD at 6.5 percent - giving the party seats in parliament for the first time.

Martin Schulz, EU parliament president and Social Democrat top candidate, was triumphant in the face of his party's 7 percent increase.

"It has been a big step forward in European politics that the Social Democrats managed to agree on one single top candidate and the election result in Germany shows that we are on the road to success," he said to the cheers of SPD supporters.

Schulz is now hoping to get enough support in the EU Parliament for his candidature to succeed Jose Manuel Barroso as the head of the EU Commission.

Turnout for the vote was estimated at 43.11 percent, according to the European Parliament website, similar to the last elections in 2009. Some 48 percent of Germans showed up to the polls on Sunday.

The European Parliament has said it would announce preliminary results for the entire bloc shortly after 2100 UTC on Sunday.

Final results and an exact allotment of parliamentary seats are expected to be announced by the end of Monday.

Voters in 21 of the 28 EU countries - including Italy and France - went to the polls to elect 600 of Europe's 751 parliamentarians on "Super Sunday."

The four-day vote began on Thursday in Britain and the Netherlands.

New European Parliament has no time to waste

Once the next president of the European Commission is chosen, the newly elected members of parliament will be able to get to work. They won't have much time to get used to their new jobs: important decisions lie ahead. (25.05.2014)