EU, US trade and technology talks to continue despite diplomatic tensions

Trade officials form the EU and the US resolve to continue working on issues around trade, despite the fallout following France’s sunken submarine deal. 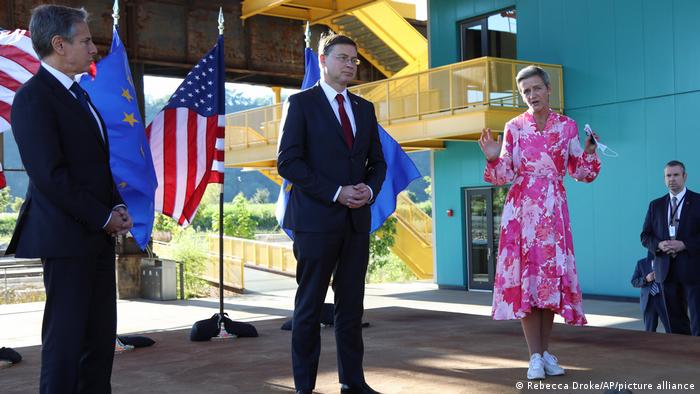 The first US-EU Trade and Technology Council (TTC) talks involving top trade officials from the European Union the US took place in Pittsburgh and will continue, albeit on shaky footing.

Talks were co-chaired by Secretary of State Antony Blinken who tweeted that discussions had been "energizing."

"It's just a remarkable spirit of cooperation and collaboration, and a desire between the United States and European Union to work very, very closely together," Blinken told reporters.

There was consensus among officials that the work of 10 expert panels tasked with seeking solutions to various issues around trade, should continue.

However, France's continued anger over its canceled multi-billion dollar submarine contract with Australia threatened to derail talks from the get-go.

What was agreed on?

In a joint statement it was decided that working groups that have been established should continue work on issues dealing with climate and cleaner technology, along with issues around global trade.

Strengthening and securing supply chains especially when it came to semi-conductors was identified as a key task for the relevant working group, especially overcoming short-term supply chain issues.

Among the other determinations was the importance of investment screening and ensuring both the EU and US were protected from risk arising from certain foreign investments.

There would be moves towards developing "trustworthy" artificial intelligence systems that serve societies and economies.

The TCC was established in June by US President Joe Biden and European Commission President Ursula von der Leyen as a way of putting the conflicts over trade tariffs that arose during former President Donald Trump's administration behind them. The body also addresses issues such as securing supply chains and fighting unfair trade practices employed by countries such as China.