EU to Help Resolve Post-Election Crisis in Armenia | Europe| News and current affairs from around the continent | DW | 03.03.2008

The European Union will send a mediator to Armenia to help resolve post-election violence that has left at least eight people dead. Two parliamentarians were arrested after defecting from the ruling party. 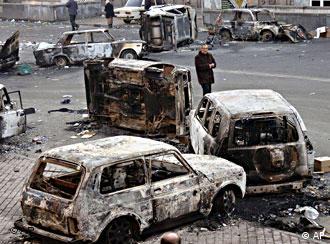 After speaking with Armenian President Robert Kocharian on Sunday, March 2, EU foreign policy chief Javier Solana has asked his special envoy for the South Caucasus, Peter Semneby, to go to Yerevan on his behalf.

At least eight have died in the bloody political unrest that followed disputed elections in the small Caucasus republic. The EU has offered to mediate. 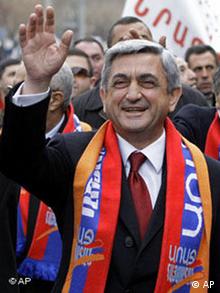 Sarkisian was the official winning candidate

The violence began on the weekend, when Armenian police reacted violently to ongoing protests in response to the presidential election on Feb. 19. Some 15,000 protesters took to the streets, demonstrating against alleged government vote-rigging.

Witnesses said that Armenian security forces used truncheons, fired into the air and released tear gas to disperse the protestors. Local media reported dozens of injured opposition supporters of failed presidential candidate Levon Ter-Petrosian, while the police said 33 of its members were hurt.

As a result, the outgoing president declared a 20-day state of emergency. That declaration was upheld by parliament, which is led by the vote winner in the election, Prime Minister Serzh Sarkisian.

Parliamentarian Miasnik Malkhasian was arrested for "attempting to seize power," the press service of the Armenian police told AFP. A source in the security services said that Hakob Hokopian, another member of parliament, was arrested on the same charge.

"This is a new step in the violence the authorities are using against the opposition to deprive it of its leadership," said Arman Musinian, a spokesman for opposition leader Levon Ter-Petrosian. 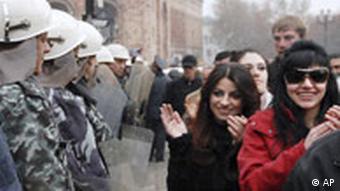 At first, the demonstrations were peaceful

The two deputies had defected to Ter-Petrosian's camp after being elected as members of the ruling Republican Party.

The state of 3.2 million has emerged as a strategically important region, lying along gas routes from the energy-rich Caspian Sea region to Europe and being a close partner of Iran.

Sunday's violence was the worst in Armenia's post-Soviet history, causing Ter-Petrosian to call for a 20-day halt to demonstrations in a radio address blared through loudspeakers on cars driven through the city center. 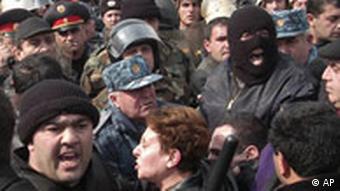 Ter-Petrosian has refused to accept official results that showed him with 21.4 percent of the vote, far behind Prime Minister Sarkisian, who won just over the 50 percent needed to avoid a run-off election with the second-place finisher.

The opposition has lodged an appeal with the Constitutional Court to invalidate the results, complaining of mass voting violations, including the beating and kidnapping of its supporters at the polls.

The Organization for Security and Cooperation in Europe's vote-monitoring arm declared the elections mostly in adherence with international standards.

European lawmakers have said the result of Kenya's election was not credible and called for a fresh vote if a fair recount was not possible. They also want to temporarily freeze aid to Kenya as violence there continues. (17.01.2008)

The German Development Institute appealed to the EU to push for more efficiency in development programs. It suggests that similar, or even the same, schemes run side-by-side, are wasting funds that could be better used. (06.02.2007)

Would you like to comment on this story? Please include your name and country in your reply.