Patriarch Kirill of Moscow is an ally of Russian President Vladimir Putin and shares his anti-Western views. That's made him a target of European Union sanctions. 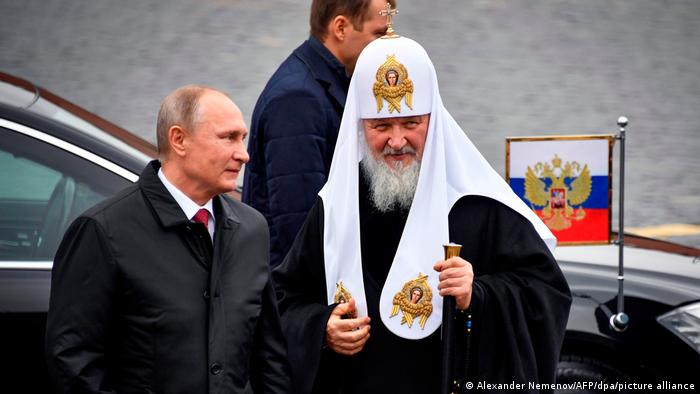 The European Commission has recommended more sanctions — this time against another Vladimir. Vladimir Gundyayev is better known as Kirill, the Patriarch of Moscow and all Rus' and Primate of the Russian Orthodox Church.

The 75-year-old is one of 58 people newly targeted by the European Union. The suggested sanctions include a travel ban and asset freeze due to their closeness to, and defense of, Russian President Vladimir Putin and his course in Ukraine.

Sanctions would make it unlikely for him to be able to attend the 11th Assembly of the World Council of Churches, which will take place in August in Karlsruhe, in western Germany.

How important is faith for Putin's war?

Putin and the patriarch of Moscow are closely linked. Both hail from St. Petersburg. The latter ascended to the leading church role in 2009, in between Putin's two long stints as president. In contrast to his predecessor, Kirill has praised Putin's military adventures abroad, calling operations in Syria, for example, a "holy fight."

He used the same term to describe the invasion of Ukraine, and has stuck with Putin's use of "special operation," rather than calling it a war. Allegations of atrocities committed by Russian troops against Ukrainian civilians have not changed his tune that the fighting is about territorial defense, not aggression.

Kirill has also denounced homosexuality and liberal values along the same lines Putin has.

In turn, Putin has allowed religion to be taught in school. Church revenue is tax-free. The Russian president himself often appears at Kirill's services.

Western experts of the Russian Orthodox Church have criticized the patriarch's views. Other religious leaders, such as Pope Francis, have been hesitant to criticize a man in a position seen as the same level of religious authority. However, that is starting to change.

"After 20 minutes of listening to all his justifications for the war, I said: 'I don't understand any of this. Brother, we aren't politicians. We can't speak the language of politics, but of Jesus,'" Francis told the Italian newspaper, Corriere della Sera.

"'We have to find our way to peace and stop the shooting. The patriarch can't be Putin's messenger,'" he said.

A meeting between the two is due to take place in Jerusalem next month — their first since they met in Cuba in 2016. However, the pope's expectations are low, fearing "ambiguous signals," he said.

The European Commission's recommendation to sanction the patriarch is not set in stone. EU member states have to agree to it. If it goes through, Kirill may lose properties and other assets he is thought to have in Western countries.

Ukraine war: The role of the Orthodox churches