The EU's Media and Telecommunications Commissioner Viviane Reding has called for an end to the publication of private material, such as photos, from those who died in last month's school shooting in Germany. 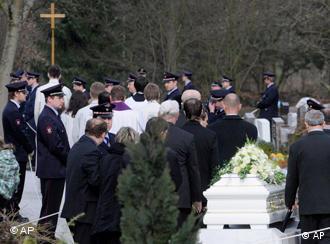 Reding criticized the media in the weekly video message she posts on her website. In it, the commissioner focused on the dangers that social networking providers like Facebook potentially pose to the privacy of their users.

The commissioner was particularly critical of the media for using images, acquired from such sites, of the victims of last month's Winnenden shootings.

"Do we cross a border of the acceptable, when, for instance, the pictures of the Winnenden school shooting victims in Germany are used by commercial publications just to increase sales?" the commissioner asked.

A number of leading German media sources, from the tabloid daily newspaper Bild to the weekly news magazine Focus to the private television station RTL, have been criticized for appropriating pictures of those killed in the shootings from the Internet.

"Privacy must, in my view, be a high priority for social networking providers and for their users," Reding said. "I firmly believe that at least the profiles of minors must be private by default and unavailable to Internet search engines."

Late last month, German public broadcaster ARD confronted Bild with the question of whether using such "private" images was appropriate - or even legal. Bild answered that it was not required to seek permission to use pictures published on the Internet either from those photographed or their families.

But family members and many journalists say the practice is abhorrent.

"The families don't want pictures to be published without consent," journalist Frank Nipkau from a group of local newspapers in and around Winnenden told ARD. "This is a monstrous violation of limits and a huge offense against the ethics of the profession."

Of sorrows and profits

The father of one of the victims also spoke out about the intrusiveness and insensitivity of the media.

"The Bild newspaper and others, including television stations, are converting our sorrow into profits," he said. "They just take the pictures without asking what those left behind think and feel."

There are concerns that media sensationalism encourages copycat crimes. One expert on such shootings even took the private TV news station ntv to task during their live broadcast about the Winnenden shootings on March 11.

"The availability of images, dramatic ones that are simply made available without any commentary, are the thing that pushes a perpetrator over the edge and makes him go ahead with such a deed," Joachim Kersten, a professor at the German National Police Academy, told a pair of non-plussed ntv presenters as live pictures were being streamed in from the Southern German town. 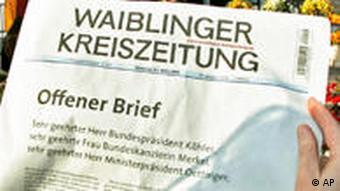 Similar sentiments were echoed by families of the victims in a statement published in the Winnenden Zeitung newspaper twelve days after the shootings.

"We would like the name of the shooter and his images to no longer be made public," the family members wrote. "The example of Winnenden shows that the way the media currently report is not suited to prevent acts of violence in the future…The result is that the perpetrator becomes a hero."

Both victims groups and the EU Commission have called upon the media to regulate themselves -- in deciding whether to publicize the identity of perpetrators as well as whether to exploit material from the victims.

If they fail to rein themselves in, new rules could be implemented to restrict the sorts of material that can be used in reporting on such tragically sensational events.

Thousands of people converged on the small German town of Winnenden on Saturday, where a memorial service was being held for the 15 victims of a school shooting. The German chancellor and president were in attendance. (21.03.2009)

In an open letter, the parents of the 17 year old youth who went on a shooting spree that shocked Germany last week, express their sorrow. Tim K., who shot dead 15 in the attack, had been treated for depression. (18.03.2009)

German prosecutors have launched a criminal investigation into the father of Tim K, the 17-year-old who shot dead 15 people in a shooting rampage in his former school, on suspicion of manslaughter. (16.03.2009)