The European Commission has launched an investigation into possible illegal state aid to Ryanair. It alleges the Irish carrier received the funds from regional authorities at its base at Frankfurt-Hahn Airport. 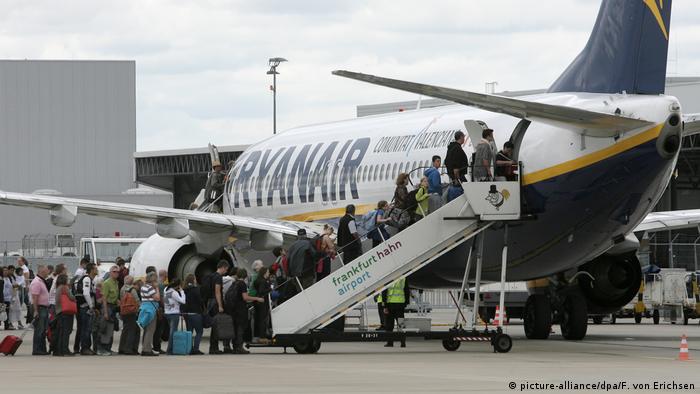 Brussels announced on Friday it had opened an in-depth probe into a number of marketing and financial deals between Irish carrier Ryanair and Frankfurt-Hahn Airport in Germany.

The European Commission said the investigation served the purpose of finding out whether regional authorities had provided any illegal state aid to the airline.

"We will investigate whether regional and local authorities in Germany, against the rules, gave an unfair advantage to Ryanair over its competitors," EU Competition Commissioner Margrethe Vestager said in a statement.

Brussels explained it was specifically looking into training aid and funding for a crew and pilot school plus a maintenance hall that the Irish no-frills airline received between 2009 and 2017.

Ryanair said in a statement that it was "confident" that its Frankfurt-Hahn agreement fully complied with EU State aid rules. "The EU has previously investigated this matter in 2014 and ruled that there was no state aid involved in the agreement."

Frankfurt-Hahn is located 120 kilometers (75 miles) west of Frankfurt. According to the European Commission, Ryanair handles about 2.5 million passengers there annually, with more revenues coming from its air cargo operations on the ground.

The state of Rhineland-Palatinate used to have a majority stake in the airport until it sold off its 82.5 percent stake to Chinese conglomerate HNA in 2017.