Germany questions use of regional airports | Germany | News and in-depth reporting from Berlin and beyond | DW | 06.04.2013

Germany questions use of regional airports

Kassel-Calden Airport cost some 270 million euros and is the pride of the Hesse state government. But experts call the latest regional airport a typical case of everything wrong with German airport policy. 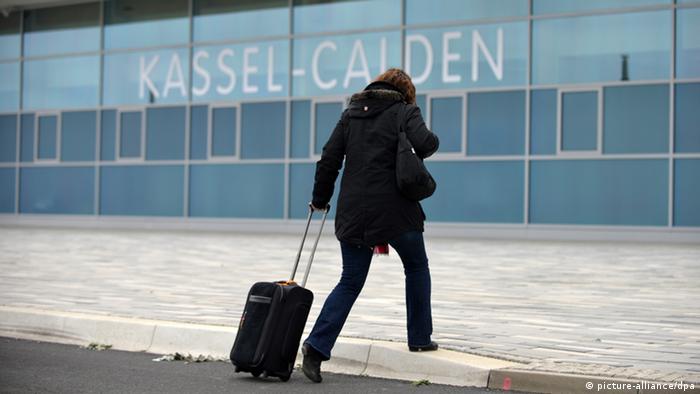 "En route to failure," "Money pit in the hinterland," and "Germany's most unnecessary airport." Those were just some of the headlines German media used to cover the opening of the country's latest airport in the small town of Calden, in the state Hesse about 15 kilometers outside the central German city Kassel, on April 4.

During the opening ceremony, Directing Manager Jörg Ries made a tongue-in-cheek reference to the country's biggest building site disaster, the planned airport in Berlin. "We've finished," he said, stressing that in contrast to the massive project in the German capital, his airport had been opened at least. Overall, Kassel-Calden Airport cost considerably more than planned, coming in at 270 million euros ($350 million dollars) rather than the initial 150 million euros estimated. 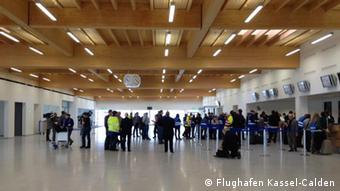 But it's no secret that while there is always high demand for Berlin's airports, it's far from clear whether Kassel will attract enough passengers to justify being built. On the opening day, some 30 passengers made use of the airport. The next flight to Antalya, Turkey, which was scheduled for the following day, was cancelled because only six passengers wanted to fly from Kassel.

In the trial period, staff tested for situations with some 1,400 test passengers queuing in front of the 10 check-in counters. But on April 5, the tour operator decided to drive the six passengers with destination Antalya to the airport Paderborn - which is only 70 kilometers away.

Wings for North-Hesse, deficit for taxpayers

The proximity of other airports is one of the reasons why air traffic expert Jens Flottau took a "very, very critical" view of the project in Kassel. Paderborn is not the only airport that's easily reached by train or car. "Hanover is not far, Frankfurt is not very far. This airport is really more the result of regional politics than of necessities discovered in the air traffic market."

PR expert Cord Schellenberg agreed: "It was a model project of former premier of the state of Hesse, Roland Koch." When Koch was in office, he wanted to boost the structurally ailing northern part of Hesse. At the opening ceremony of Kassel-Calden airport, Koch's successor, Volker Bouffier, announced: "The region of northern Hesse is picking up speed. Today it was given wings." 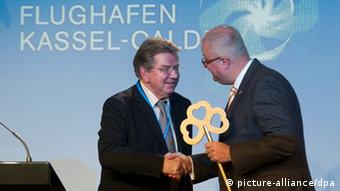 Flottau said he doesn't share in the premier's euphoria.

"There are various regional airports that are not being utilized to capacity and who largely produce losses," he told DW.

The ADV airport association listed 22 international airports in Germany, in addition there are 16 small regional airports and small airfields- scattered all over the country: Allgäu on the borders of the Alps in the south; Weeze on the Dutch border in the west; Lübeck Airport, whose closure was prevented in the very last minute when a new investor pumped in fresh money; and Rostock on the northern coast. It's estimated that the vast majority of Germans can reach an airport that offers international destinations within 90 minutes.

But the industry is ailing. Just two weeks before the opening in Kassel, in a statement ADV spoke of the "worst start of a year since the financial and economic crisis in 2009." Flottau said the crisis of regional airports is being felt all over Europe. Rising fuel prices make small aircraft unprofitable, but larger planes can't fly some of the routes.

But airport chief Jörg Ries in Kassel still stressed that he is optimistic as far as the future is concerned. The airport will not be in the black before 2020, and the calculated losses will be covered by its owners: the state of Hesse and its communities. In other words: the taxpayers.

"I can't imagine any scenario where Kassel airport would make profits," said Flottau, adding that there is no national airport policy in Germany to address where it makes sense to have an airport.

Schellenberg said there was not enough involvement from the federal government when ti comes to airport policymaking. Federal authorities, said Schellenberg, have even hindered air traffic. They introduced an air traffic tax, which generates an annual 1 billion euros. "The more the state digs into passengers' pockets the less the same passengers will consider embarking on short trips, weekend trips, city trips," said Schellenberg. "That stops the development of regional airports which focus on those passengers."

Frankfurt-Hahn: We don't have much time 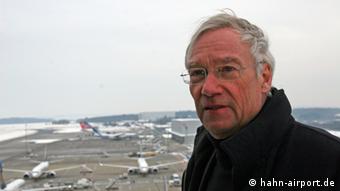 One of the oldest regional airports is the one in Frankfurt-Hahn. Twenty years ago, a former US military airfield in the Hunsrück region of western Germany was turned into a airport. Heinz Rethage recently took over as manager and is far less relaxed than his colleague in Kassel when it comes to prospects for the future. The authorities of the federal state Rhineland-Palatinate where Frankfurt-Hahn is located have pledged 80 million euros until 2014 to save the airport from bankruptcy.

"We don't have much time," Rethage told DW. He is not afraid of competition from Kassel. "We have our eyes on Amsterdam, Luxemburg and Frankfurt. We don't look at Kassel."

Rethage ought to have his eyes on and do something about the airport's extreme dependence on Irish low-cost carrier Ryanair, which is responsible for 90 percent of passenger volume at Frankfurt-Hahn. It's both a blessing and a curse for the airport: Ryanair generates a lot of air traffic, but the airport doesn't benefit enough from it. There are frequent reports of attempts of blackmail.

There are, however, at least there are two competitors, said Rethage, adding that he hopes for more to come soon. This summer, the investors want to see Rethage's restructuring plan reduce costs, improve the organization and provide a view of what the future holds for Frankfurt-Hahn. 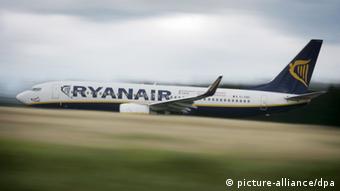 The airport has something other regional airports don't, said Flottau: it's successful as a freight airport. That's a fact Rethage is proud of: "When it comes to freight we're the fifth-largest airport in Germany." Forecasts estimate that growth in the freight sector will continue to rise over the next couple of years, Rethage said. Frankfurt-Hahn has a 24-hour, all-encompassing operating license, short distances and good prices, he said. Rethage added that he wants to focus on the international market and "convince airlines all over the world of our advantages."

But first up he has to convince the European Commission. The Commission has launched an investigation into whether the financial support some airports in Europe receive out of public funds don't unduly distort competition - and one of those being scrutinized is Frankfurt-Hahn. Should the EU decide to assume a strict position towards subsidies, Flottau said, "the air will get thinner for regional airports."

But for now, such problems still seem a long way off in Kassel. For the first few weeks in operation, only a few flights have been confirmed by tour operators. Mallorca is supposed to be the next destination after Turkey. But not enough passengers have booked for a departure from Kassel yet. And if it turns out that the number of those who choose to take off from Kassel is too low, then tour operators will again transport those passengers to nearby airports. That's what reality looks like in the region with wings "that's picking up speed." the fastest route is still the motorway.

A winter outbreak with freezing temperatures, winter storms with snow and ice are wreaking havoc across Europe. Frankfurt has shut down most of its runways and the Eurostar train service has been suspended. (12.03.2013)

Former Air Berlin airline chief Hartmut Mehdorn has been named new CEO of Berlin's troubled airport project. The post has been vacant for a while after the former CEO was sacked and no-one wanted to succeed him. (08.03.2013)

Rich German states helping poor German states by sending them cash is a founding principle of Germany's financial equalization. Yet some of the richer states feel the system has gone too far and outlasted its use. (04.03.2013)