Brussels has imposed sanctions on 22 Myanmar officials and a state- owned oil and gas company that has been a major source of funding for the ruling junta. 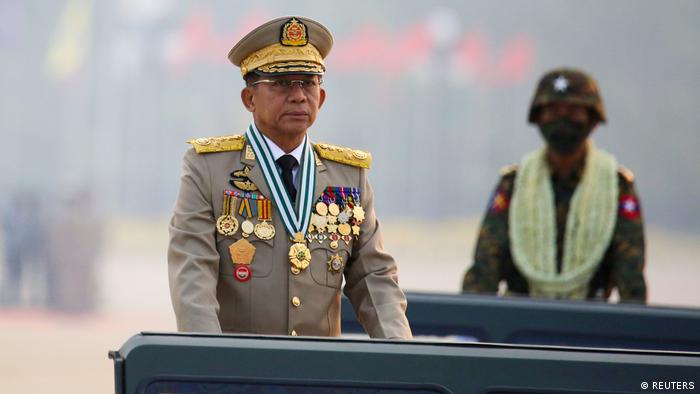 The European Union has expanded its sanctions on Myanmar's military junta to include several key officials and four entities tied to the regime, as the bloc continues its response to last year's coup.

MOGE is seen as a major source of revenue for the junta.

The military junta's brutal crackdown on resistance to its rule has drawn global condemnation. However, previous rounds of US and European sanctions against the junta have excluded oil and gas.

"The European Union is deeply concerned by the continuing escalation of violence in Myanmar and the evolution towards a protracted conflict with regional implications," a statement read.

"Since the military coup, the situation has continuously and gravely deteriorated."

The EU in its statement repeated called for "an immediate cessation of all hostilities, and an end to the disproportionate use of force and the state of emergency."

Asset freezes and travel bans were imposed on Monday on 22 people, including the ministers for investment, industry and information, officials at the election commission and senior military officials.

Oil and gas company now on list of sanctions

Human rights groups in Myanmar and around the world had argued that slapping MOGE with sanctions would slash a crucial source of the military's funds.

According to government forecasts, revenues from natural gas account for nearly 50% of the Myanmar's foreign currency inflows.

MOGE is also expected to earn $1.5 billion from offshore and pipeline projects in 2021-2022, the forecast said.

The sanctions on MOGE come a month after energy giants Total Energies and Chevron said they were exiting Myanmar over human rights abuse.

MOGE was a venture partner in offshore gas projects, including the Yadana gas field.

There are now 65 officials and 10 companies on the EU list of sanctions.

Armed resistance has followed the military takeover after widespread nonviolent protests were put down.

Over 1,500 people are reported to have been tortured or killed in the violence.