Western sanctions against Moscow have dealt the Kremlin a conspicuous blow, forcing the state-owned airline Aeroflot to cancel all flights of its budget subsidiary. 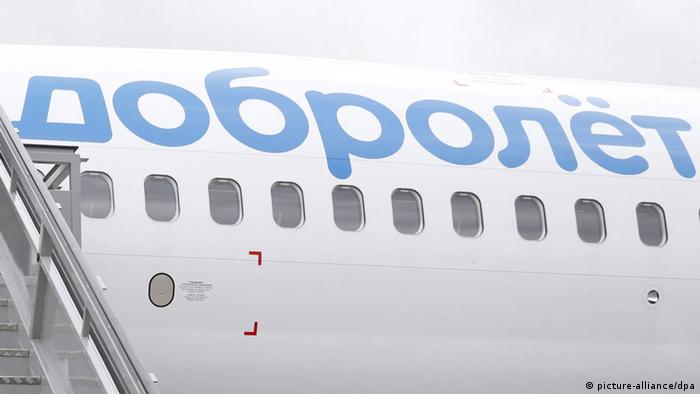 A low-cost subsidiary of Russia's state-owned airline, Aeroflot, suspended all its flights Monday, because Western sanctions had forced leasing deals for its aircraft to be canceled.

The airline, Dobrolet, was founded late last year as a budget option for domestic travel in Russia. Its maiden flight took place in June from Moscow to Simferopol, a city on the Crimean peninsula that Russia annexed from Ukraine in March.

"Due to sanctions imposed by the EU ... we are forced to temporarily suspend flights on all routes from August 4, 2014," Dobrolet said in a statement on its website.

Aimed at Russia's financial, military and energy sectors, the sanctions were the first time the European Union had targeted Russian President Vladimir Putin and his inner circle for the Kremlin's support of pro-Russian separatists in eastern Ukraine.

The measures had nullified contracts under which Dobrolet leased Boeing 737-800 aircraft.

The airline said it would continue to ferry passengers between Dobrolet's homebase in Moscow and Simferopol on its sister budget airline, Orenair, for several weeks. Other passengers would have their tickets reimbursed.

On Monday, the Moscow-based newspaper Kommersant wrote that the cancellations of Dobrolet's leases meant the political effect of the EU's sanctions had finally become apparent.

"The EU has finally succeeded at demonstrating the effectiveness of its sanctions," it wrote.