The European Commission says it will seek a solution with the incoming Biden administration to the ongoing row with Washington over subsidies. The new US tariffs apply to wine and aircraft components. 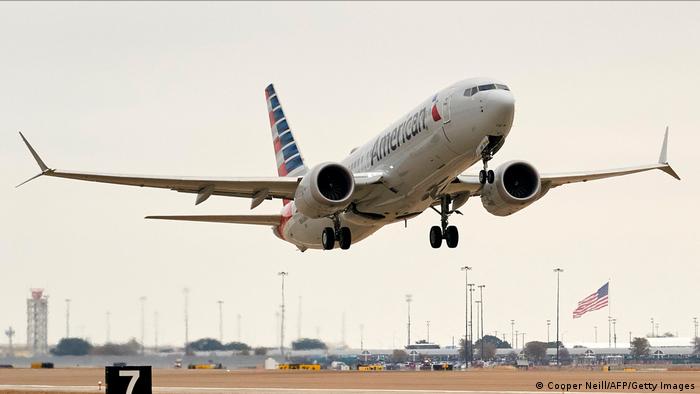 The European Commission said Thursday it "regrets" the US decision to slap more tariffs on French and German products as part of a spat over aircraft manufacturers Airbus and Boeing.

Brussels accused Washington of "unilaterally" disrupting ongoing talks and said it would seek a solution to the row with the incoming Biden administration.

Earlier, US trade officials announced plans to impose additional tariffs amid the ongoing row over subsidies between the US and EU.

"Aircraft manufacturing parts ... certain non-sparkling wine ... and certain cognac and other grape brandies from France and Germany" will be subject to the new measures, the Office of the US Trade Representative (USTR) said in a statement.

The USTR did not saywhen the tariffs would take effect, but noted that additional details would be "forthcoming." The new tariffs mark the latest move in a 16-year US-EU dispute over civil aviation subsidies involving European aircraft company Airbus SE and its US-based rival Boeing.

The USTR said the EU had unfairly calculated tariffs against the US following a World Trade Organization (WTO) ruling earlier this year.

That ruling allowed the EU in November to impose punitive tariffs on US imports, amounting to almost €3.4 billion ($4 billion) a year, in retaliation for unjust aircraft subsidies.

The US government has now accused Brussels of making unfair decisions: "The EU must take action to redress this injustice," the USTR said.

"In implementing its tariffs … the EU used trade data from a period in which trade volumes had been drastically reduced due to the horrific effects on the global economy from the COVID-19 crisis," the statement said.

The result was that Europe placed tariffs on many more products than if it had "utilized a normal period" to calculate them, the office added.

“However, in order to not escalate the situation, the United States is adjusting the product coverage by less than the full amount that would be justified utilizing the EU’s chosen time period."

A small US solar panels manufacturer is pushing for high tariffs on imports. This threatens the Biden administration's climate goals and the industry as a whole.