A breakthrough or just another paper? EU interior ministers want to more fairly allocate refugees within the bloc. Sea rescue operations would also be restricted. 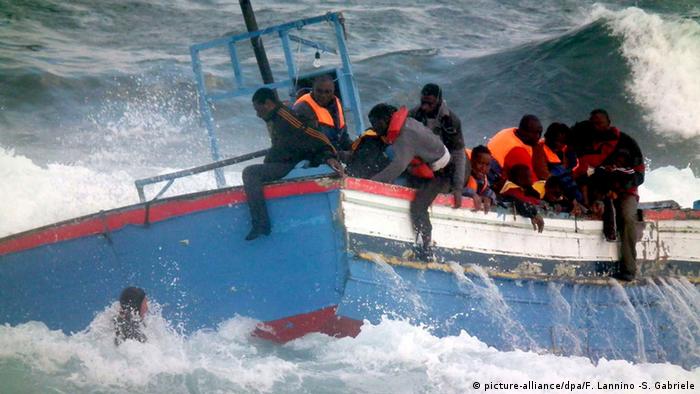 The crises bordering on Europe in Syria, Iraq, and northern Africa have led to a large increase in the number of refugees seeking asylum in the EU. "There haven't been this many refugees since the Second World War," said German Interior Minister Thomas de Maiziere at a meeting of his European colleagues in Luxembourg. Five EU countries – among them, Germany – currently take in 75 percent of the refugees in Europe. De Maiziere and European Commissioner for Home Affairs Cecilia Malmström agree that the situation cannot remain this way. "All countries have to take responsibility. Today, only half the EU member states are accepting refugees, but all 28 states have to either accept refugees directly, or take refugees from states that are overburdened," Malmström said. 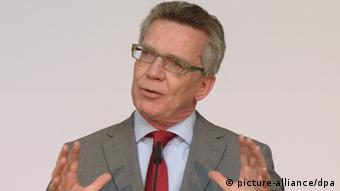 At the suggestion of France, Germany, and Italy, the interior ministers agreed on a range of measures to reduce the number of refugees and to better allocate them within Europe. "With this, we have a binding statement for us all about how we intend to deal with the topic of illegal migration and refugees in the coming weeks and months," said de Maizere, calling the paper a big success. However, he added that "it still must be implemented in reality, and given the circumstances, that is very, very difficult."

His skepticism is justified. EU interior ministers have often agreed on reforms to asylum policy that never amounted to much. Now, though, "decisive" action is to be taken together with neighboring countries, particularly Libya, against human traffickers who are known to take as much as 10,000 euros from desperate refugees for their passage across the Mediterranean. All EU states have a duty to register new arrivals with fingerprints, and not simply allow them to travel on to other countries in the Schengen area without border controls. Germany has accused Italy of being one of the biggest violators of this regulation at the moment. The Jesuit refugee service in Brussels also criticized Italy this week for not doing enough to help refugees who then go underground or travel out of the country. De Maiziere has offered to lend southern EU states equipment and personnel to deal with the problem. "We are offering Italy and other states help in processing arrivals in the form of the necessary machines and officials to carry out the registrations," he said. "Things cannot continue the way they are." However, some EU diplomats say that Italy has never responded to similar offers in the past. Italy has received hundreds of millions of euros from the EU to better accommodate the influx of refugees, but the money has just trickled away, they say. 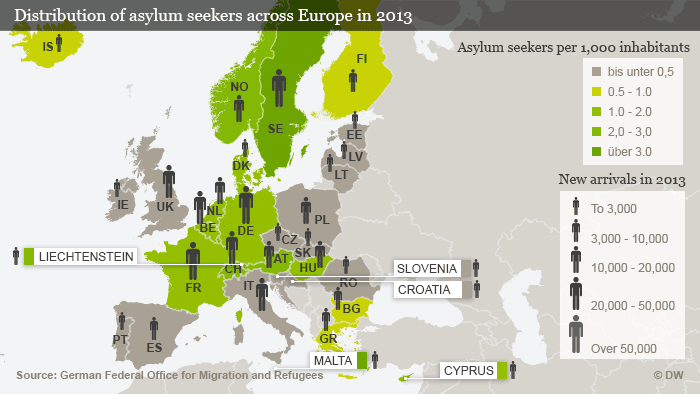 Germany, France and Sweden are popular countries for refugees applying for asylum

If all the countries were to properly register the refugees and thus make it possible to get an overview of the real strain, then de Maiziere said he would be prepared to suspend the rules of the Dublin Regulation, which stipulates that refugees have to remain in the country where they first enter the EU. Given the current large number of refugees, however, de Maiziere said allocating people according to strict quotas makes sense. "That's not part of the legislation currently, which is why it would have to happen voluntarily, and on a temporary basis," he said. "We have to agree on the quotas, for example by population size. Then we would have to ensure that those countries that are over their quota get some relief. Countries that are below their quota would be allocated refugees and have to then accept them."

Most aid organizations such as Amnesty International or Pro Asyl have been demanding such a quota system for years. The interior minister could not say whether, with a quota, Germany would have to accept more or fewer refugees than it does today. "That depends on the allocation method," he said. Italy, which has rescued over 100,000 migrants at sea this year via its Mare Nostrum program, can be sure of relief. Seen in relation to population size, Sweden and Malta currently accept the most refugees; Portugal and Poland bring up the rear. The allocation of refugees has to "unfortunately be on a voluntary basis," said Cecilia Malmström. "We have money, political pressure, and words at our disposal. But we cannot force member states to act. Rather, we have to hope that they each understand their responsibility," she said.

"Triton" instead of "Mare Nostrum" 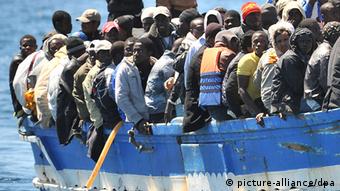 Italy has rescued more than 100,000 refugees at sea this year

The EU has decided to begin a new search and rescue operation on the Mediterranean along the Italian coast beginning on November 1. Named for the Greek god of the sea, operation Triton is meant to include three ships and two surveillance planes. It would take over from Italy's Mare Nostrum program, which was started a year ago following the Lampedusa migrant shipwreck. Italian Interior Minister Angelino Alfano is keen to end the program as soon as possible, because the monthly cost of 9 million euros is too high. Triton, however, is would be limited to the Italian coast, and not extend into Libyan waters to pick up the overfilled migrant ships. Human rights organization Pro Asyl said that the planned restrictions were "dramatic," adding that the EU was building its fortress walls and risking masses of refugee deaths. Instead of a pared down version of Mare Nostrum, what's needed is a comprehensive search and rescue service of the whole Mediterranean, the organization said.

De Maiziere and many of his European colleagues see things differently. Mare Nostrum may have saved lives, but it also gave human traffickers a perfect business model. Knowing that they were sure to be picked up by Italian ships, thousands of refugees were willing to climb aboard boats in Libya – more than ever before. There were even reports of refugee apps for mobile phones that would call up a passage plan for the tugboats. Mare Nostrum was meant to be a form of emergency assistance, but turned out to be a bridge to Europe via which more than 100,000 people, mainly from Libya, crossed the Mediterranean, said de Maiziere. "The haulers earned millions, and there were 3,000 deaths. We want to end that. We want to work more intensively with the countries of origin and help reduce the number of illegal asylum seekers," he told DW.

A Greek official rejected the criticism leveled at southern EU countries for their flawed asylum programs. Italy, Bulgaria, and Greece had to deal with the most migrants; they were simply overwhelmed, the official said. "Look at the 16,500 nautical miles of coastal borders and our 6,000 islands and show me who could have done a better job given the current economic crisis ­ – that person doesn't exist," he said. "If they're being realistic, Europe knows that. The situation has changed, and it has gotten worse. We should talk with the southern countries and give them our support."

Many of the refugees that arrive daily in Germany have to make do with makeshift housing solutions. Among them are crowded temporary shelters, hotels and unused gyms. One parliamentarian has a different idea. (06.10.2014)