European leaders have agreed to loosen public spending rules to help prop up their banking systems. Each country is responsible for its own banks -- but shouldn't act without consulting the other EU members, they said. 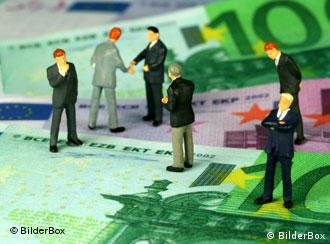 Now would be a good time to bend the rules a bit, said EU leaders

The current financial crisis was so severe that governments should be allowed to breach deficit limits to rescue the banking system, agreed the leaders of Europe's largest economies at an emergency summit in Paris late Saturday, Oct. 4.

The meeting was called by Sarkozy to formulate a common European position to surmount the finance crisis. France currently holds the 27-member bloc's rotating presidency.

A statement released after the talks said, "The application of the Stability and Growth Pact should also reflect the current exceptional circumstances." The Pact imposes rules public spending rules on EU member states, but includes a clause that allows countries flexibility in difficult situations. 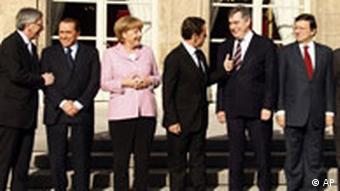 Merkel stood out in the crowd of political leaders

This was a victory for Sarkozy, whose closest advisor Henry Guaino earlier this week had declared: "Temporarily, (the Stability Pact) is not the priority of priorities. The priority is to save the world banking system and therefore save citizens' savings."

The criteria, set out in the Treaty of Maastricht, aims for a national budget deficit totalling less than 3 percent of gross domestic product (GDP) and public debt not exceeding 60 percent of GDP.

The leaders at the meeting also called for an international conference on the financial crisis that would include the G8 countries and large developing economies such as China, India, Brazil and South Africa.

"We will work with all major economies to rebuild the international banking system," Berlusconi told journalists when asked about the purpose of the meeting of the so-called G14.

Sarkozy said the aim of the international conference would be to construct "the foundation of an entrepreneurial capitalism instead of a speculative capitalism. We want to build the beginning of new financial world as they did in Bretton Woods."

The 1944 international meeting in Bretton Woods established the rules for commercial and financial relations among the world's major industrial states.

Putting an end to golden handshakes

The EU leaders also agreed to work to change to European accounting rules, increase regulation of credit rating agencies and hedge funds and alter the way executives are rewarded, in order to prevent the payment of "golden handshakes" -- that is, exorbitant severance payments -- to executives who have created risk for their companies.

"Executives who failed must be penalized," Sarkozy said. 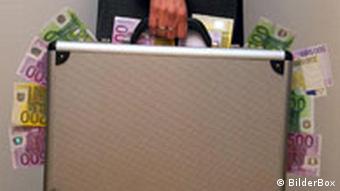 Irresponsible finance managers should be held responsible, said the leaders

The summit was preceded by a controversy over a proposal to create a 300-billion-euro ($413-billion) fund to bail out struggling financial institutions, similar to the plan passed by the US House of Representatives and signed into law by President George W. Bush late Friday.

Reportedly supported by the Dutch and the French, the idea was summarily rejected by Germany and Britain, and was not on the summit's agenda.

Sarkozy told journalists that the idea was not his. "I never assumed it, I never proposed it, I never imagined it," Sarkozy said.

Instead, in line with German and British wishes, each EU member state is to aid its troubled banks with its own funds -- but after discussions with other countries. This phrase was added as a reference to the unilateral decision by the Irish government to establish a 100-percent guarantee for depositors in the six largest Irish-owned banks.

The move, made without consultation with the European Commission, has already pushed investors away from British banks, and has put pressure on the Brown government to match it.

Merkel said that the European Commission and the ECB would talk to the Irish about their move, which contravenes the EU's state aid and competition requirements.

"But my satisfaction about (this solution) is limited," the German chancellor said.

The leaders concluded that greater cooperation was necessary between EU economies, and demanded the "immediate establishment of colleges or supervisors to oversee cross border institutions."

Barroso said that legislation aimed at improving current rules of deposits and aligning the national systems would be launched "before the end of the year."

Decisions made at Saturday's mini-summit are to be further elaborated at Tuesday's meeting of EU finance ministers and at the Oct. 15-16 EU summit in Brussels.

Hypo Real Estate, a German company caught up in the recent wave of bank failures, said that a massive government-backed bailout plan had collapsed. Its situation may be more critical than originally thought. (05.10.2008)

French President Nicolas Sarkozy has called an emergency finance summit in Paris Saturday. Washington has approved its historic $700-billion bailout package, but EU leaders are divided over what action to take. (04.10.2008)