The leaders of several euro zone member states have given tacit signals that applications to join the single-currency bloc could be expedited as the financial crisis rolls on. 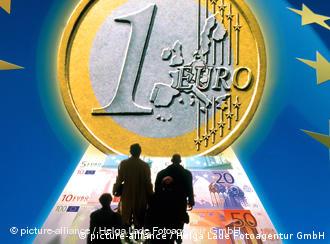 The leaders said however that stringent criteria for taking up the euro would not be relaxed, despite the gloomy economic conditions pressuring applicant-states.

German Chancellor Angela Merkel said after an EU summit in Brussels on Sunday, March 1, that the bloc "could consider" shortening the minimum two-year preparatory phase for euro membership.

"There are requests to join ERM II faster," Merkel said. "We can have a look at that." The Exchange Rate Mechanism II currency grid, or ERM II, is an agreement to maintain stable exchange rates between the euro and the currency of the euro zone applicant state to avoid excessive exchange rate fluctuations on the internal market.

Euro candidates are expected to participate in ERM II for at least two years before adopting the euro. Hungary, Poland and Czech Republic are among several states awaiting ERM II status. Estonia, Lithuania and Latvia, meanwhile, have been ERM II participants for a number of years but have so far been barred from taking up the euro.

French President Nicolas Sarkozy said "the debate is open" on whether applications to join the euro group could be sped up. However the French leader backed away from supporting present-day exemptions to criteria for joining the bloc.

"In the future, when the crisis is over, we should look and see what we have learnt from the crisis … to see if we should integrate new criteria," Sarkozy said. 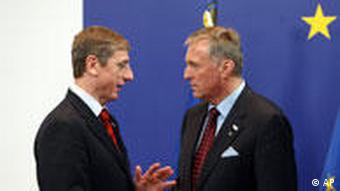 Gyurcsany, left, and Topolanek say economic conditions should be considered

Fast-tracked membership of the European single market is increasingly being seen by some eastern European states as a way of stabilizing their struggling economies, which have been hit hard by the global credit squeeze and economic downturn.

Hungary and Poland have floated the idea of speeding up their applications for euro zone membership to this effect.

"We have to accelerate the process of joining the euro zone," Hungarian Prime Minister Ferenc Gyurcsany told journalists ahead of the Brussels summit.

He agreed that euro candidates should adhere to the rigorous economic conditions for joining the bloc, but that the two-year ERM II waiting period was too long.

"We should not allow a new 'Iron Curtain' to … divide Europe into two parts," he said, warning of the growing division between rich and poor countries because of the economic crisis.

"At the beginning of the 90s, we reunified Europe. Now it is another challenge -- whether we can unify Europe in terms of financing and its economy," he said. 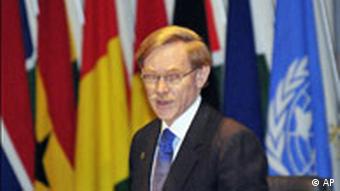 Czech Prime Minister Mirek Topolanek said leaders at the summit agreed to the possibility of a discussion on whether the euro accession rulebook needed to take better consideration of economic conditions.

"We said that we could have a discussion as to whether the rules are too soft in the times when the economy is booming and too strict in times when we are in more difficulty," said Topolanek, whose country holds the EU's rotating presidency.

He acknowledged however that quick changes to the rules were out of the question.

"I don't think that anybody who was there (at the summit) as a head of state or government accepted the idea of changing the rules at the moment."

Prospective euro candidates usually have to respect five economic conditions before adopting the currency. They must keep deficits and debt down, their currencies stable, long-term interest rates in line with targets and inflation under control in a sustainable way.

EU Papers Over Cracks Amid Fears of Economic Iron Curtain

Judging from the comments by EU leaders after less than four hours of talks in Brussels Sunday, it would appear that all is well within the 27-member bloc. But beneath the surface, serious cracks remain. (02.03.2009)

EU leaders tried to overcome their differences on how to address the ongoing economic crisis, but protectionism fears and unheeded calls for aid from smaller members raised fears of a "new iron curtain" in Europe. (01.03.2009)

Unity at Stake as EU Summit Begins Under Protectionism Cloud

EU leaders gathered in Brussels on Sunday for a summit designed to shore up the bloc's beleaguered unity in the midst of a damaging row over protectionism and fears that the EU may risk breaking into splinter groups. (28.02.2009)