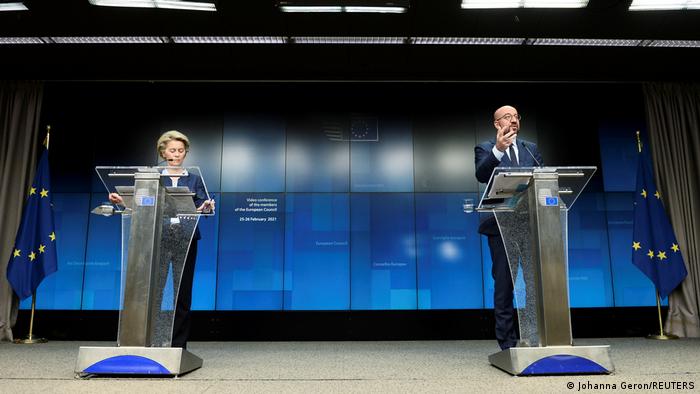 European Union leaders agreed on a new strategy aimed at boosting defense and security in the bloc on Friday.

"We want to increase defence investment, and we want to enhance civilian and military capabilities and operational readiness," Michel told reporters.

The 27 leaders also discussed how to increase their resilience to cyberattacks and hybrid threats, and debated relations with their southern neighbors.

NATO chief at the EU talks

NATO Secretary General Jens Stoltenberg also joined the video conference for a discussion on cooperation between the bloc and the defense alliance.

"The EU efforts are going hand in hand with the military efforts across the continent," said Stoltenberg.

"For NATO, the main task during this pandemic has been to make sure that a health crisis doesn't turn into a security crisis, because the threats we are faced with before the pandemic, they are still there: Russia's aggressive actions, more brutal forms of terrorism, sophisticated cyber attacks, the rise of China and the security implications of climate change."

"I'm totally convinced that this new Biden administration offers a unique opportunity to renew the strong alliance between Europe and the United States," said Michel.

The EU has been trying to coordinate more closely on defense and security matters in recent years, for example with plans to jointly fund defense development projects.

The aim is to offer Europe more strategic autonomy. France in particular has argued that the coronavirus pandemic, a resurgent Russia and former US leader Donald Trump's threats to cut off allies show Europe has to be able to stand on its own.

"We share very much the same population, the same members and the same neighborhood and the same challenges," Stoltenberg said. "It makes it absolutely obvious that we need to work together."