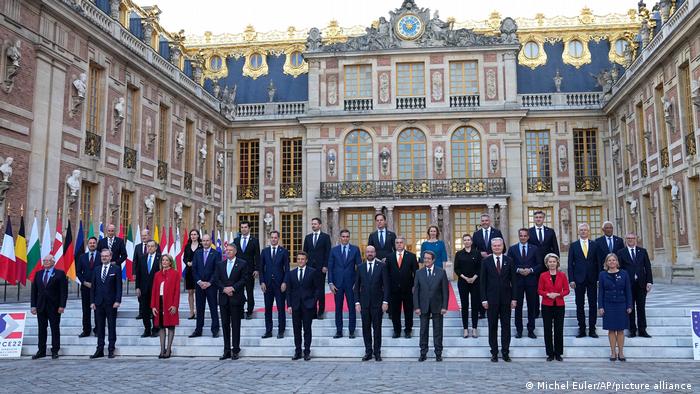 European leaders met in France to discuss Russia's invasion, as well as EU membership for Ukraine

European Union leaders have ruled out fulfilling Ukraine's call for a fast-track integration with the bloc during a meeting in France.

Leaders of EU member states, who gathered at a two-day unofficial summit in Versailles Palace near the French capital, Paris, on Thursday discussed the fallout from Russia's invasion of Ukraine.

While EU member states have been fully united in backing Ukraine's resistance, leaders are divided on how fast the bloc could move to accept Ukraine as a member, and how swiftly the EU could cut energy ties with Moscow.

What did EU leaders say about Ukraine's possible membership?

During Thursday’s talks, EU leaders emphasized once again that a speedy path to block membership was impossible.

"There is no such thing as a fast track," Dutch Prime Minister Mark Rutte said.

"I want to focus on what can we do for Volodymyr Zelenskyy tonight, tomorrow, and EU accession of Ukraine is something for the long-term — if at all," he stressed.

There are those  "who think that .. Ukrainians are fighting for their lives and (deserve) a strong political message ... and those who are still debating the procedures," Slovenian Prime Minister Janez Jansa said.

A joint statement from the EU leaders released early on Friday, said the European Council has "acted swiftly" and invited the European Commission to submit its opinion on Ukraine’s application for membership "in accordance with the relevant provisions of the Treaties."

"Pending this and without delay, we will further strengthen our bonds and deepen our partnership to support Ukraine in pursuing its European path. Ukraine belongs to our European family," the statement said,

The summit comes as more than 2.2 million people have fled Ukraine into neighboring states to seek refuge from Russian attacks, which have often hit civilian infrastructure.

Russia's invasion is widely seen as having shattered the European security order that came into being following World War II and the collapse of the Soviet Union in 1991.

The Versailles summit was originally meant to discuss the EU's new economic model, as a highlight of France's six-month term holding the rolling EU presidency, however, that focus shifted to Russia's attack on Ukraine, which has been widely seen as a breach of international law.

"Two weeks ago Russia brought war back to Europe. Russia’s unprovoked and unjustified military aggression against Ukraine grossly violates international law and the principles of the UN Charter and undermines European and global security and stability," the statement from EU leaders said.

The statement said EU member states will enforce the implementation of sanctions imposed on Russia over its invasion and that they are ready to institute more measures if needed to keep pressure on both Russia and Belarus.

"We are determined to increase even further our pressure on Russia and Belarus. We have adopted significant sanctions and remain ready to move quickly with further sanctions," it said.

Ahead of the summit, French and German leaders Emmanuel Macron and Olaf Scholz jointly phoned Russian President Vladimir Putin to call for an immediate cease-fire in Ukraine.

"We call on Russia to fully abide by its obligations under international humanitarian law. It must ensure safe and unhindered humanitarian access to the victims and internally displaced persons in Ukraine, and allow safe passage for those civilians who want to leave," the joint statement from EU leaders said.

Sanctions against Putin: Could they cripple the global economy?

The debate over Europe's energy dependence on Russian gas and oil has made the divide between EU member states glaringly clear. Countries like Germany, Austria and Hungary cover most of their energy needs with Russian fuel; Latvia and Poland, however, have called for an immediate halt to Russian imports.

Latvian Prime Minister Krisjanis Karin, for instance, voiced strong support for an end to imports as a tool to force Putin's hand, saying, "I am convinced that we should make a decision to stop energy imports from Russia to get Putin to the negotiating table and end this war."

"At this moment of crisis," said European Parliament President Roberta Metsola, "we must remember that energy is political — it always has been," imploring leaders to send a clear signal to Moscow by limiting fuel imports.

Poland and Lithuania have already called for such a step as a way to sap Russia of its main source cash financing the war in Ukraine.

Despite putting the German-Russian Nord Stream 2 pipeline on ice as war loomed, German Chancellor Olaf Scholz has been exceedingly reluctant to join the call for an immediate end to imports. Earlier this week, Scholz said there was currently no other way to cover Europe's energy needs than through Russia.

In Versailles, the German leader made the case for precisely targeted sanctions in order to pressure Russia. He also highlighted the need to minimize the economic impact of such measures on EU citizens.

The war in Ukraine has led to a dramatic spike in energy prices, leading European Commission President Ursula von der Leyen to inform those present that she would lay out proposals for emergency measures, such as temporary price caps, for their consideration by the end of March.

Ukrainian President Volodymyr Zelenskyy has addressed a special sitting of the European Parliament amid Russia's onslaught. Zelenskyy said he was convinced his compatriots had earned the right to be considered equal.