EU freezes part of transatlantic trade negotiations with US

The EU has put one area of its negotiations with the US for a transatlantic free trade deal on hold. Brussels has expressed concern over provisions that would allow corporations to sue governments in private court. 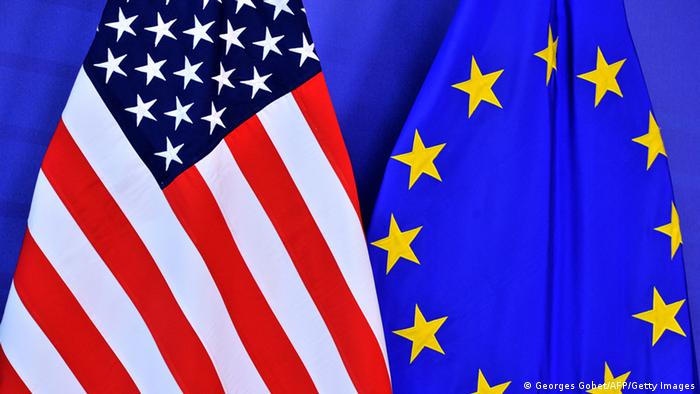 The European Union on Tuesday temporarily halted one area of its free trade negotiations with the US, giving member states three months to provide input on provisions that would allow corporations to sue governments over violations of the potential trade deal.

"I know some people in Europe have genuine concerns about this part of the EU-US deal," said EU Trade Commissioner Karel De Gucht in a press release. "Now I want them to have their say."

"Some existing arrangements have caused problems in practice, allowing companies to exploit loopholes where the legal text has been vague," De Gucht continued.

European consumer, environmental and union groups have expressed concern that so-called investor-to-state dispute settlement (ISDS) agreements could undermine regulations that protect the public good. Under an ISDS, a corporation can sue a government in private court for allegedly violating the conditions of a trade deal.

Mood good, but no results in EU and US trade talks

The European Union and the United States still have a long way to go: After a second round of talks on the free trade agreement, TTIP, many questions remain unanswered. And, data protection was not even addressed. (15.11.2013)

"Accepting the ISDS would mean opening the door for big corporations to enforce their interests against EU legislation," said Socialist EU parliamentarian Bernd Lange. "This would deprive states of crucial policy space in important fields such as health and environment."

Nothing new for EU

But De Gucht has said that European corporations regularly make use of ISDS agreements with other countries.

"The European Commission is not pushing something new, but pursues a policy that is firmly anchored in national policies and binding treaties," he said.

According to Paul de Clerck, with Friends of the Earth, many ISDS agreements are with developing countries that do not have strong multinational corporations.

"With Canada and especially the United States it changes the whole game," de Clerck said. "With the US claim culture it is very likely that companies will use that to challenge whatever policy or legislation."

EU officials have said that the broader free trade negotiations with the US would proceed according to schedule. Brussels estimates that the Transatlantic Trade and Investment Partnership (TTIP) could bring an annual windfall of 119 billion euros ($161 billion) to the 28-member bloc.