The EU and US have announced sanctions against individuals involved in the current crisis engulfing Ukraine and Russia. EU foreign ministers meeting in Brussels said they wanted to send a strong signal to Moscow. 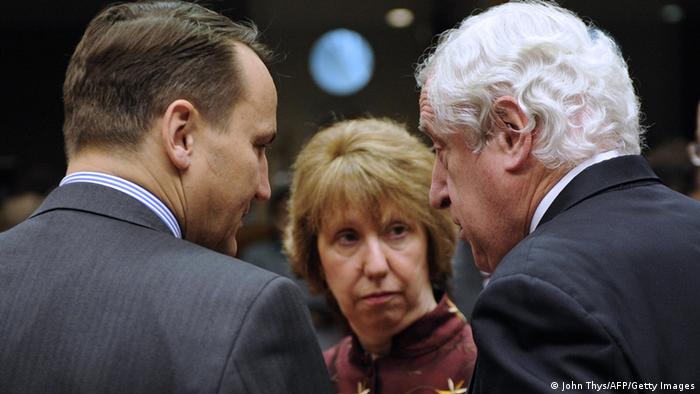 EU foreign ministers announced early Monday afternoon that the 28-member bloc would levy asset freezes and travel bans against 21 officials from Ukraine and Russia. Further measures were expected in a few days. The move came in response to those individuals' roles in the political crisis between Russia and Ukraine, which resulted in the secession of Crimea.

"It is a day on which clear messages need to happen," German Foreign Minister Frank-Walter Steinmeier said following the three-hour meeting in Brussels. According to him, Russia's Black Sea Fleet commander Alexander Vitko was on the EU ban list, alongside several members of Russia's parliament.

A statement from the White House followed soon after confirming that US President Barack Obama had ordered sanctions against at least seven other individuals linked to the crisis, including ousted Ukrainian President Viktor Yanukovych.

Ahead of the meeting in Brussels, EU foreign ministers said they needed to act swiftly against Russia, as it had refused thus far to answer to the Western leaders' calls for a de-escalation in tensions with Ukraine.

"We are trying to send the strongest possible signals to Russia, a signal trying to ensure that they understand the seriousness of the situation," EU foreign policy chief Catherine Ashton told reporters. "I call upon Russia yet again to meet with the Ukrainian leaders and to start dialogue with them and to try to move to de-esclation as quickly as possible."

The Czech Republic's foreign minister, Lubomir Zaoralek, told reporters that they were focusing on 20 "political individuals" to levy sanctions against by the end of Monday.

"This is to be the first set and I would not rule out that this list can be widened at the next meeting of the Council," Zaoralek said, referring to the EU Council's next scheduled meeting on Thursday.

While many foreign ministers, including those from France and Britain, clearly stated that they wanted tough action against Russia, others emphasized the need to keep the lines of communication with Moscow open.

Dutch Foreign Minister Frans Timmersmans admitted that bans would "become inevitable" because of Russia's support for the referendum in Crimea, which Western leaders had condemned as illegal and illegitimate.

However, he added: "I would do anything possible to avoid sanctions because I believe everybody will suffer if we get into sanctions."

"The only [people] who can prevent this are the Russians," the Dutch foreign minister added.

Germany's top diplomat, Frank-Walter Steinmeier, expressed a similar view ahead of the meeting on Monday. In an interview with the daily newspaper Bild, he said the EU would "give a clear and definitive answer to the referendum, which violated international law," but that "every effort [should be] aimed at avoiding a further escalation [of the crisis]."

On Monday morning, Crimea's lawmakers officially requested annexation by Moscow and declared that all remaining Ukrainian institutions were Crimean property.

"The Republic of Crimea appeals to the United Nations and to all countries of the world to recognize it as an independent state," a document approved by Crimea's regional assembly said.

"The activities of state institutions of Ukraine on the territory of Crimea are finished and their powers, their property and their budgets are transferred to the state organs of the Republic of Crimea," it said.

Russia was scheduled to review the request on Tuesday, with President Vladimir Putin addresing a joint session of the Russian parliament, according to Russian media reports.

On Sunday, 96.8 of ballots cast in the Crimean referendum voted yes to declaring independence from Ukraine and joining the Russian Federation. The voter turnout was estimated at 83 percent, a high figure considering that many opponents of the motion had pledged to boycott the ballot.

Meanwhile, Ukraine's parliament approved a presidential decree to partially mobilize a military reserve unit within the next two months, according to news agency Reuters.

The plan, which would involve some 40,000 reservists, was aimed at preventing "a repeat of the Crimean scenario in Ukraine's southeastern regions," the Ukrainain secretary of the National Security and Defense Council, Andriy Parubiy, said on Monday.

It also requested technical assistance from NATO, according to the Associated Press on Monday. The report added that NATO said it would strengthen its cooperation with the eastern European country, however it did not provide further detail about what that might include.

Russia's actions in the Ukrainian crisis have deeply worried foreign leaders, who fear that the rising tensions in eastern Europe could foreshadow further Russian aggression.

Following the ouster of Ukrainian President Viktor Yanukovych in February, Russian President Vladimir Putin deployed troops to the Crimean peninsula, where they have gradually taken over Ukrainian military bases. While the Russian leader admitted to providing political support to ethnic Russians in Ukraine who felt threatened by the pro-EU interim government in Kyiv, Putin has denied sending troops to the region. He has also repeatedly stated that Moscow does not recognize the legitimacy of the interim government in Ukraine.