EU Foreign Ministers Agree Message for Next US President | Europe | News and current affairs from around the continent | DW | 03.11.2008

EU Foreign Ministers Agree Message for Next US President

The EU's foreign ministers met on Monday to agree on a joint message for the winner of the US presidential election, including how best to strengthen transatlantic ties. 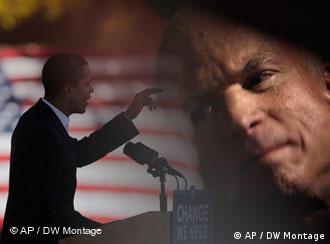 No matter who wins, the EU expects a more balanced relationship in future

The bloc's foreign ministers envisage a partnership of equals to meet key challenges such as the financial crisis and peace in the Middle East, said French Foreign Minister Bernard Kouchner, whose country holds the EU presidency.

"The world has changed because we have realized that a great country, which will remain a great country, is not the only one concerned by the world's problems," he told reporters in the southern French city of Marseille.

Arriving for the talks, British Foreign Secretary David Miliband, said that creating such a partnership would demand much from the EU member states.

"This isn't just about asking America to do things," he told reporters. "It's about Europe stepping up as well."

to shape "an inclusive global agenda that responds to the changing economic and social and political times."

"We want to have an even stronger relationship with the United States, and for that reason I think it's important that we say what we think is important for us," she said. "I think it should be a more balanced relationship."

Crisis in DRC also on agenda

The fighting has displaced tens of thousands

Kouchner and Miliband were also set to brief their fellow foreign ministers on their weekend trip to Kinshasa and Kigali to try and negotiate an end to unrest in the eastern Democratic Republic of Congo.

The EU is considering sending a military humanitarian mission to support the UN peacekeeping force in the DRC, where rebel fighting has displaced an estimated 250,000 people.

"The world's political leaders are determined to make sure there's no repeat of the murderous activities of the 1990s," said Miliband, referring to the genocide in Rwanda and civil war in eastern Congo.

He said ministers were waiting for a UN special envoy to the country to report back to the Security Council on the situation before deciding to mobilize an EU military mission.

EU Looks to Close Ranks with US to Keep Global Influence

The European Union must close ranks with the United States if the two powers are to keep their global influence during the rise of states like China, India and Russia, EU foreign policy chiefs said at informal talks. (06.09.2008)

McCain Would Be Good for Trans-Atlantic Trade, Says Expert

John McCain's nomination is nearly certain, but he's yet to win his party's full support. Republicans tend toward unilateralism, but McCain as president could have perks for Germany, says expert Stormy-Annika Mildner. (01.09.2008)

At a speech at Harvard University, German Foreign Minister Frank-Walter Steinmeier called for change in the trans-Atlantic relationship. On Friday, he talked with Barak Obama on ties between the US and Europe. (12.04.2008)