Steinmeier Calls for New US-Europe Relationship; Talks to Obama | Germany| News and in-depth reporting from Berlin and beyond | DW | 12.04.2008

At a speech at Harvard University, German Foreign Minister Frank-Walter Steinmeier called for change in the trans-Atlantic relationship. On Friday, he talked with Barak Obama on ties between the US and Europe. 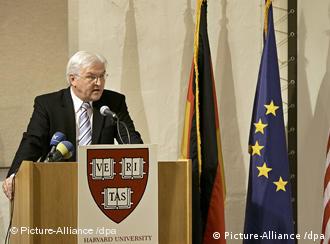 Steinmeier told an audience of several hundred academics, students and representatives of Boston's political and business communities that the partnership between Europe and the United States had to adapt to current global realities.

He said future cooperation on both sides of the Atlantic needed to focus on three core areas: a sustainable world, a more secure world and a world with more justice and openness. 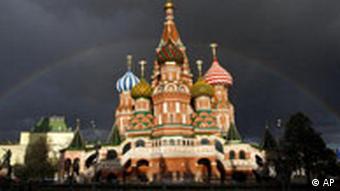 Steinmeier added that to accomplish that security, Russia had to be part of the process and both the US and Europe should work at keeping Moscow an active and constructive partner. Issues such as Iran, the Middle East and arms control would be much more difficult to address without Russia's participation, he said.

Regarding sustainability, he encouraged thinking about a trans-Atlantic "climate bridge" that would push for closer technological cooperation to combat global warming.

On Friday, the foreign minister held a 15-minute telephone call with US senator and Democratic presidential candidate Barack Obama over future relations between Europe and the United States. 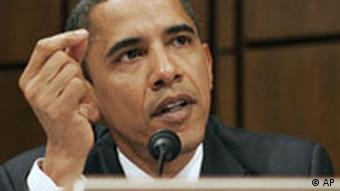 In Washington, Steinmeier said he and Obama had agreeed that "it is necessary to renew the trans-Atlantic agenda."

One area of closer cooperation was arms reduction, especially regarding nuclear weapons. Energy policy was also discussed and the question of how to avoid conflicts over the allocation of resources.

Steinmeier said the two agreed to "stay in contact." It was the first contact between Steinmeier and the US senator.

The foreign minister also spoke with the foreign policy advisors of Hillary Clinton and John McCain, the Republican presidential candidate.

"I would be glad if I were able to get in contact with Ms. Clinton in the coming Months," he said. "I know Mr. McCain already from our many meetings in Germany."

Germany and US Smooth Over NATO Differences

In an attempt to sex-up the finance ministry and show the human face behind the numbers and stuffy suits, Germany's top accountant is "getting down with his homies." (31.03.2008)

Do you think the US-Europe relationships needs renewal? Please include your name and country in your reply.