EU finance ministers debate how to pay for stimulus spending | Europe| News and current affairs from around the continent | DW | 01.10.2009

EU finance ministers debate how to pay for stimulus spending

Nations across the European Union have pumped billions into stimulus programs designed at boosting economic growth during the global recession. Now, it's time to consider the bill. 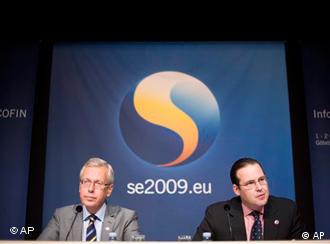 EU finance ministers are wary of debt as recession ends

The national debt in most European Union countries has grown excessively thanks to stimulus spending and the worldwide recession. In the EU, 20 out of 27 nations have a national debt that is over 3 percent of their gross domestic product. That falls outside the limit that EU leaders set to keep public debts from getting out of control.

Some nations are already well on their way to loss of control: Ireland's deficit is nearly 10 percent of its GDP. Germany's deficit is better than that, but it is still around 4 percent. Normally, the European Commission could sanction any countries which use the euro currency and which fail to bring their budgets within the 3 percent stability pact. But Jean-Claude Juncker, president of the euro group, says these are exceptional times.

"We think that the stability pact should be applied in a flexible way," he said at a meeting of EU finance ministers in Goteborg, Sweden, on Thursday. "That means in times of weak growth or recession it shouldn't be applied too strictly." 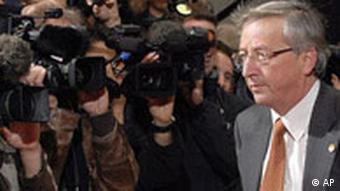 While governments will have more time to lower their national debts, paying back the deficit won't happen automatically. Swedish Finance Minister and EU Council President Anders Borg says now is the time to start planning for a debt reduction, even though the recession is not officially over.

"The economic situation, I think, is clearly moving ahead to a tentative recovery," Borg said. "At the same time, this is the time to start deciding and communicating exit strategies."

One of the biggest steps towards lowering national debt will be scaling back and eventually phasing out the stimulus programs, which are responsible for much of the public debt in Europe. However, some nations still feel that their economies are still too weak to survive without stimulus spending.

The world's economy will begin recovering from a deep recession starting next year, but progress will be slow, according to a revised economic forecast released by the International Monetary Fund (IMF). (01.10.2009)

European Union economies are expected to grow into the fourth quarter, but the recovery will be slow and officials in Brussels have warned governments to brace themselves for more job losses. (14.09.2009)

New data released a month ahead of the federal election shows the economic crisis has left Germany with a gaping budget deficit. But there are increasing signs that economic recovery may be just around the corner. (25.08.2009)