The European Union has slashed its economic growth estimate for the 28-nation bloc, indicating the current recovery will remain sluggish until 2016. Weak France and Italy are proving a drag on higher growth. 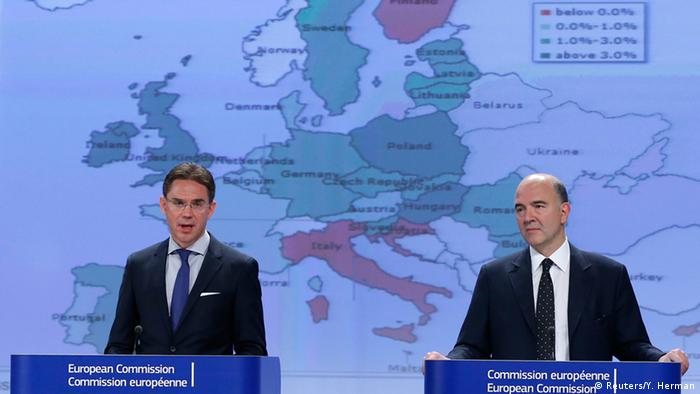 According to the European Commission's autumn economic forecast released Tuesday, output in the 28-nation bloc is expected to grow by only 1.3 percent this year, instead of an earlier prediction of 1.6 percent.

For the 18 nations that use the single currency, the outlook by the EU executive is even bleaker, forecasting economic expansion to reach just 0.8 percent, rather than 1.2 percent, as predicted earlier. In the two years ahead, eurozone economies are expected to expand by 1.1 percent and 1.7 percent, which is also lower than previously calculated by the Commission.

In the wake of a prolonged recession in the eurozone, the economic and employment situation was "not improving fast enough" said EU Commission Vice President Jyrki Katainen.

One of the main problems plaguing Europe was low inflation, the Commission said in its report, which would prove a drag on growth. For the eurozone, it predicted the rate to sink to a "very low" 0.5 percent this year before rising to 0.8 percent in 2015.

The Commission also blamed a weaker performance in Europe's larger economies in particular, the exceptions being Spain and Britain.

The EU Commission sees growth this year "coming to a stop in Germany after a very strong first quarter, protracted stagnation in France, and contraction in Italy."

In 2015, Europe's biggest economy is now expected to expand by only 1.1 percent, while France and Italy - the eurozone's second and third largest economies - are forecast to deliver growth of 0.7 percent and 0.6 percent respectively.

The only major EU economy slated to accelerate stronger than expected is Britain.

"The EU's recovery appears weak, in comparison to other advanced economies and with respect to historical examples of post-financial crisis recoveries," the EU executive's report said.

Debts and deficits too high

In its dire forecasts, Brussels said the public deficit in France would surge to 4.5 percent of gross domestic product (GDP) in 2015 and keep widening to 4.7 percent in 2016. Budget shortfalls in Spain, Portugal, Britain, Slovenia and Croatia were also set to run afoul of the EU's limit of 3 percent of GDP.

Italy, meanwhile, is burdened with the bloc's biggest mountain of government debt, with the commission saying it expected the level of debt to remain at 133 percent of GDP throughout 2015.

Following the release of the EU growth report, European shares gave up early gains on Tuesday and turned negative.

Stock traders in Paris told the news agency Reuters the market was surprised at the gap in the deficit projections for France, showing that the Commission was less optimistic than the French government.