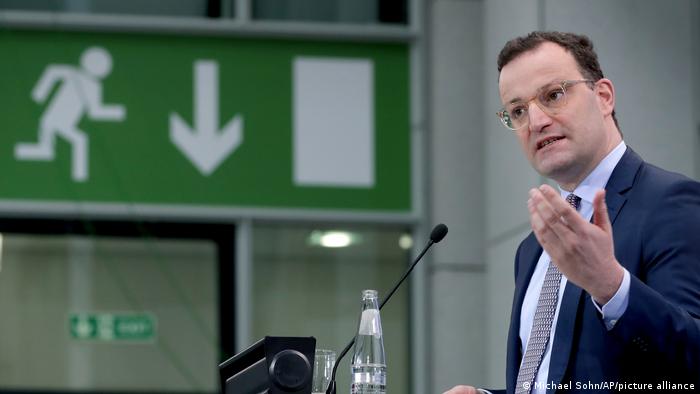 German Health Minister Jens Spahn has said the European Union should monitor its vaccine supply by requiring licensing for vaccine exports, arguing that the EU has sunk hundreds of millions of euros into establishing production capacities in advance.

"It would be a good idea if companies had to obtain a license to export vaccines so that we could monitor which vaccine leaves the EU after having been produced or bottled in Europe," Spahn said in an interview with DW on Monday.

"After all, we have advanced several hundred million euros in almost all of the contracts that the EU has signed so that production capacity can be expanded," he explained.

Spahn's comments came as the European Commission said it will require pharmaceutical companies producing COVID-19 vaccines in the EU to register in advance any exports of doses to third countries.

The register is expected to be put into effect this week, and will keep track of which EU producers make vaccine exports and how many doses they ship outside of the bloc.

Under the plan, vaccine makers would also need a license to export doses made in the EU.

"The EU will take any action required to protect its citizens and its rights," said Health Commissioner Stella Kyriakides earlier Monday.

He urged the EU not to give the impression that it is only thinking about itself while other countries are looking outwards.

The EU rollout of COVID-19 vaccines has been criticized for its sluggish start, with per capita vaccination rates lagging behind the United States and United Kingdom.

Spahn rejected the idea that lack of vaccines could have been solved by placing larger orders in the first place. "I'm pretty sure that there was no decision which could have effectively avoided this shortage," he told DW.

British-Swedish pharma company AstraZeneca is under pressure from EU leaders after the company warned last week it would fall far short of supply targets.The AstraZeneca vaccine still needs to be approved in the EU, with regulators expected to announce their decision on Friday.

BioNTech-Pfizer, which produces doses in Germany and Belgium, also announced last week that it would have to cut delivery of doses to EU countries due to supply problems.

The Health Minister expressed a level of self-criticism with regards to a sluggish response earlier in the pandemic where Germany fell behind some other countries: "In hindsight, the realization is that more would have been better sooner. It starts with buying masks but also in the field of sequencing."