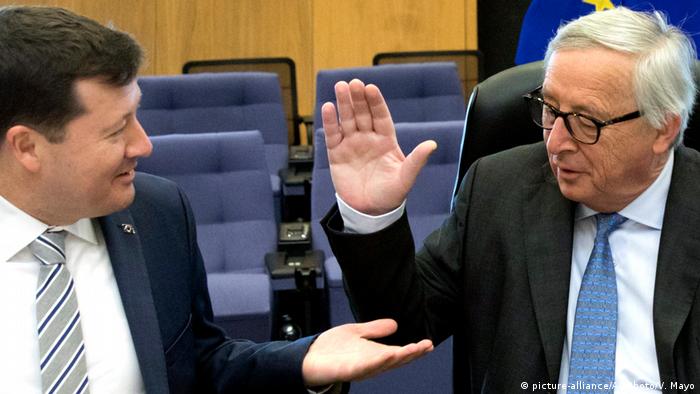 The European Commission confirmed Wednesday that Selmayr would not stay on as secretary general when fellow German Ursula von der Leyen takes over as president of the EU's executive in November.

Instead, Selmayr is set to head the EU's mission in Austria, the Commission said.

EU Commissioner for Personnel Günter Oettinger said it was "self evident" that the general secretary "should not have the same nationality" as the president.

Oettinger heaped praise on Selmayr, thanking him for his "effective management" as head of the EU's 32,000-member civil service.

"I think the five years of the Jean-Claude Juncker Commission would not be conceivable in this form without his [Selmayr's] involvement," said Oettinger.

"I think most are thankful to him. And those that are not thankful have respect for him, at least," added Oettinger.

Selmayr had hinted at his departure last week. Wednesday's decision was reached by the EU's College of Commissioners.

Selmayr, a 48-year-old who studied law in Germany, the United States and Britain, was fast-tracked to become the commission's secretary general in February 2018, earning rebukes from the bloc's ombudswoman Emily O'Reilly and the European Parliament.

Between 2004 and 2010, he served as Commission spokesman on telecommunications and media policy.

Before taking up duties in Vienna on November 1, Selmayr will continue acting as an adviser to Juncker on "important strategic matters," according to the Commission.

Who will succeed Selmayr hinges upon von der Leyen, who takes office as Commission president on November 1.

In the interim, the top post will be handled on a temporary basis by Ilze Juhansone of Latvia, the EU bureaucracy's longest-serving deputy general secretary.

In Vienna, Selmayr will replace Jörg Wojahn, who is set to move to Berlin to head the Commission's mission there, Politico magazine reported.

Selmayr to become 'new Head of Representation in Austria'