EU Commission losing patience with Greece | Europe | News and current affairs from around the continent | DW | 07.02.2012

The EU Commission is pushing Greece to finally implement reforms, warning that otherwise Athens might not receive any more bailout cash from Europe. 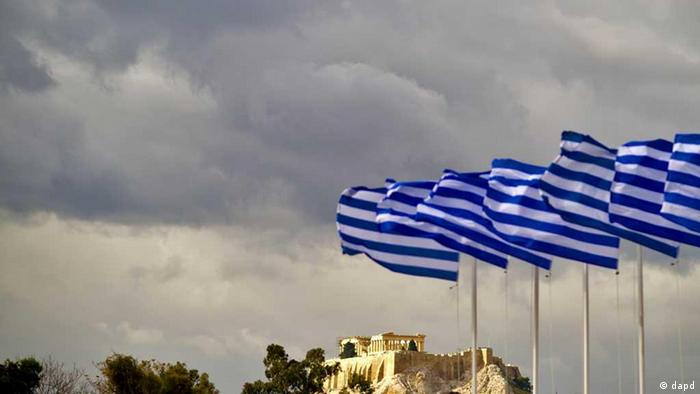 The ball is in the Greek authorities' court, Brussels says

The representatives of the European Commission have shown the patience of a saint when it comes to matters concerning Greece. And they have often been very restrained when speaking in public. But it seems this is now coming to an end.

For months, the European Union, the European Central Bank and the International Monetary Fund, known together as the troika, have been negotiating with the Greek government concerning a second bailout. This despite the fact that Greece has yet to fully implement the conditions attached to the first bailout. In addition, there have been doubts whether all of Greece's parties even feel bound by the commitments.

Antonis Samaras, the head of the conservative New Democracy party, has been openly disputing the latest austerity measures called for by Greece's international creditors. Weekend negotiations with the party leaders in the transitional government of Prime Minister Lucas Papademos also failed to come to any agreement.

"The truth is that we are already past the deadline," European Commission spokesman Amadeu Altafaj said in Brussels on Monday. "The ball is in the court of the Greek authorities." Speaking in Brussels, Altafaj said Greece had to bring something to the table in order to receive help from the eurozone, adding that Greece had "lived beyond its means for a very long time." 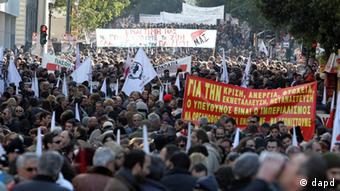 Greeks are increasingly unhappy with the austerity measures

"The normal consequence in such a situation would actually be state bankruptcy," said Altafaj. But he said Greece was profiting from the "unprecedented solidarity of its partners."

"I therefore reject any account that has created the impression that Greece has been forced into something," he added.

That last sentence in particular should also please German Chancellor Angela Merkel. In recent months, she has seen herself increasingly confronted by the accusation that she has been ruthlessly acting against Greece's best interests.

Minimum wage much higher than in Portugal

Altafaj named many different areas in which Greece will have to catch up to its eurozone neighbors. Some of Greece's industries still remain largely isolated, cut off from healthy competition. And the country's monthly minimum wage of 870 euros ($1,142) is far beyond what it can afford. By contrast, Portugal - also the recipient of a bailout - has a monthly minimum wage of 566 euros, and in Spain, it's 748 euros.

Commission not working on a euro exit

Altafaj said Greece's troubles "were not caused by the troika," implying that the Greeks had no one to blame but themselves. The crisis only "worsened chronic problems that had existed in the Greek economy for many years."

Greece's party leaders are likely to meet on Tuesday to discuss the austerity measures, amid calls from the country's unions for another general strike. Altafaj stressed that the Commission was not working on a Greek exit scenario from the monetary union. But it's not secret that some have been considering such a move.

The Commission is doing everything "to achieve a different result," said Altafaj. But, it was implied, if Greece doesn't play along, there may not be any other choice. But a Commission spokesperson would never actually say such a thing out loud.

In his first official visit to Berlin since becoming the European Parliament's new president, Martin Schulz has called on Greek parties to finally meet the prerequisites for further bailout funds. (06.02.2012)

Greek coalition leaders have postponed negotiations until Tuesday after failing to reach an agreement on crucial austerity measures. France and Germany have called on Greece to approve budget cuts before it's too late. (06.02.2012)

Negotiations between Greek lawmakers and Prime Minister Papademos have failed to yield an agreement on terms of a badly-needed bailout from the European Union. Papademos has set Monday as the deadline for a decision. (06.02.2012)