The European Commission has issued a set of recommendations on how EU member states should organize their finances and fix their economies. Among them are direct bank aid and more time for Spain to rein in its deficit. 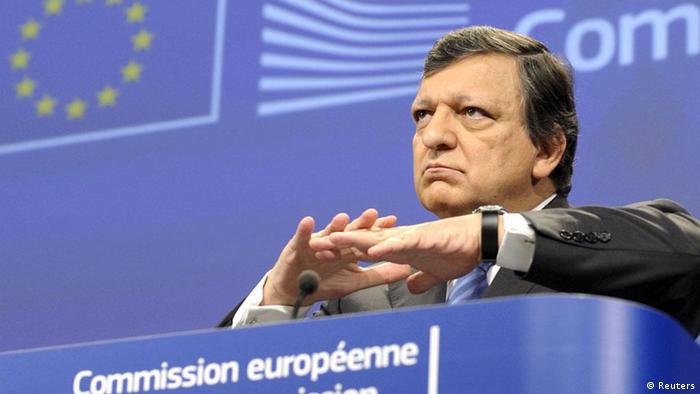 The European Commission has come out in favor of direct aid from the European Stability Mechanism (ESM) to shore up distressed banks in a move seen targeted primarily at helping overcome a worsening banking crisis in Spain.

In a major economic policy document issued Wednesday, the EU's executive body said that the vicious circle of weak banks and heavily indebted states lending to each other must be broken.

Borrowing costs for the Spanish government soared above an unsustainable 6 percent Wednesday, as investors fled the debt-laden country amid fears of a collapse of the banking system.

Against this background, the Commission gave Spain until 2014 to drive its public deficit below three percent - the EU's limit for public debt, which Spain originally planned to adhere to one year earlier.

EU member states rejected more burden-sharing among Europe's banks a few months ago, but Barroso said that the "mood has changed since then."

However, Germany remains firmly opposed to an EU-wide banking union, and said that any use of ESM bailout funding must include a strict austerity program monitored by the EU.

The Commission also turned up the heat on Greece, warning that it must carry out sweeping austerity measures and reforms if it wants to receive the next tranche of a rescue package worth 130 billion euros ($161 billion).

Greece is waiting for the so-called "troika" of the European Commission, the International Monetary Fund (IMF) and the European Central Bank (ECB) to unlock the funds, but the EU executive indicated that the visit might be delayed.

"The date of the next review mission depends on the political outcome of the repeated elections," the Commission said, referring to the Greek general election on June, 17, which might sweep anti-austerity forces into power.

In the focus of the Commission's economic policy document are countries that have come to be major players in the eurozone debt crisis.

For Spain, the report noted that the country must change its "tax-to-GDP ratio" which was among the lowest in the EU due to tax breaks, notably for homeowners.

In addition, Spain needed to accelerate pensions reform, open up regulated professions and the retail sector, as well as improve its education system to curb youth unemployment.

In Italy, tax evasion and poor schools, as well as low productivity and excessive red tape, were criticized by the report, stating that Italy wasted pre-crisis years in which GDP growth was "three-quarter percentage points below the eurozone as a whole."

France's public deficit was seen as "too high and growing," which in the Commission's report highlighted the need for further austerity measures, in addition to reforms to pensions, taxes and the labor market.

Even Germany - Europe's economic powerhouse and primary paymaster - was taken to task by the EU executive for failing to address the country's demographic problem, the enduring vulnerability of its regional banking sector, and an emerging shortage of skilled labor.

However, the EU Commission also announced that it would stop its so-called excessive deficit procedure against Germany - a measure designed to force member states to trim their deficits down to 3 percent of GDP.

The procedure, which was started in 2009 and might have entailed a hefty fine, was obsolete, the Commission said, as the German deficit amounted to just 1 percent in 2011 and was expected to drop to 0.5 percent this year.