European Commission President Jose Manuel Barroso urged the eurozone to "act in a spirit of solidarity and responsibility" and approve the international loans package for debt-hit Greece. 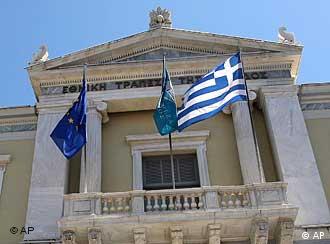 "Be decisive to help Greece bring its economy back on track and help preserve the stability of the euro area," Barroso said in a statement on Sunday, May 2, adding that the proposed Greek austerity measures "constitute a solid and credible package."

Greece has reached a deal with the European Union and the International Monetary Fund that opens the door to a multi-billion euro financial aid package, but only after promising to cut its runaway national deficit by 30 billion euros (40 billion) over three years.

The deal, believed to be worth up to 120 billion euros, will be the first such rescue of a member of the 16-nation eurozone.

During a televised cabinet meeting on Sunday morning, Greek Prime Minister George Papandreou said that the size of Greece's bailout by the European Union and the International Monetary Fund was "without precedent" in the world. 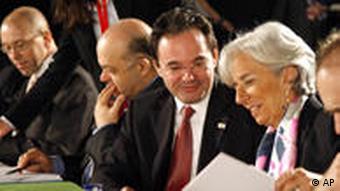 Greek Finance Minister George Papaconstantinou said that Athens promised to cut its budget deficit to below three percent of Gross Domestic Product (GDP) by 2014. The Greek government plans to make more modest improvements than initially expected over the next three years, cutting its deficit from 13.6 percent of GDP last year to 6.5 percent of GDP by 2012.

Eurozone finance ministers are meeting in Brussels on Sunday afternoon to discuss the rescue package. The meeting will be chaired by the eurozone's top finance minister, Luxembourg Prime Minister Jean-Claude Juncker.

The finance ministers will be briefed by officials from the IMF and the European Commission on the conditions of the bailout package. They will then have to approve these conditions. 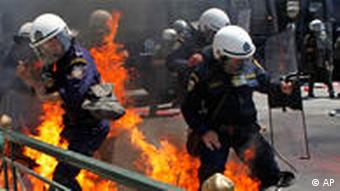 Angry protestors and riot police clashed in central Athens on Saturday after thousands took to the streets in May Day rallies to signal their opposition to plans for the harsh public spending cuts.

According to one recent poll, in a country where one in five lives below the poverty line, more than half of Greeks say they will take to the streets if the government agrees to new austerity measures.

On Saturday, more than 12,000 people marched through Athens towards the US embassy to protest the measures they say only hurt the poor while striking workers cut off sea transportation between islands and on the country's railway network.

Some carried banners reading "Hands off our rights! IMF and EU Commission out!" and "No to the IMF's junta!", referring to the military dictatorship which ruled Greece from 1967 to 1974.

Prime Minister Papandreou called on the public to support the tough measures, saying he would "do anything to avoid the country going bankrupt."

In an interview with the Sunday edition of German tabloid Bild, Chancellor Angela Merkel spoke out in favor of tougher rules to ensure the stability of the eurozone.

Merkel fought for the IMF's involvement in the Greek rescue deal

"As a last resort, we have to be able to take away the voting rights of countries that do not live up to their responsibility, at least temporarily. The German state sees this as an absolute necessity," Merkel told the paper.

In the same interview, Merkel also welcomed plans by German banks to contribute to the German share of the Greek bailout package.

Germany will have to pay more towards the aid deal than any other EU country. German banks have been under pressure from various political parties who insist they should contribute to a rescue deal.

Chancellor Angela Merkel said she would welcome a contribution from Germany's private sector to the Greek financial aid package, while a prominent opposition leader called the proposed move "no more than a placebo." (01.05.2010)

Greece's financial woes have left the state on the verge of bankruptcy. The IMF and eurozone member states are planning a massive bailout, with Germany expected to provide the bulk of the rescue package. (30.04.2010)

Eurozone finance ministers will meet in Brussels on Sunday to thrash out the details of a multi-billion euro rescue deal designed to help Greece tackle its massive public debt. (30.04.2010)