EU Climate Body Lets Industry off the Hook Until 2013

The EU parliament’s environment committee has let elements of EU industry off the hook for five years with the drafting of proposals that won’t see them begin paying for their carbon emissions until 2013.

The committee did, however, vote to have carbon emissions cut by 20 percent of 1990 levels by 2020, with possibly deeper cuts -- up to 30 percent -- should an international global warming agreement be reached which involves developing countries.

"All eyes now are on Europe's environment ministers. The ball is now in their court. Will they show the climate commitment needed by developed countries to make an international deal possible by 2009?"

The votes will likely set the parliament's agenda in energy and climate negotiations with EU leaders ahead of a final agreement later this year. 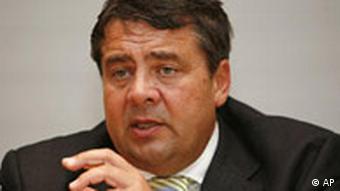 Sigmar Gabriel, German environment minister, and other EU leaders will agree on the EU's climate position late this year

But in what green groups have labelled a reprieve for industry, EU sectors such as steel, aluminium and cement have slightly benefited from Tuesday's vote.

The environment committee said such industries that were vulnerable to a global economic slowdown should pay for only 15 percent of permits in 2013, rising to 100 percent by 2020.

Avril Doyle, the Irish Conservative member of the EU parliament who led the legislation through the committee, said the decision was taken with an eye on protecting vulnerable industries from competitors in rival countries with more lax emissions trading regulations.

"The crisis in liquidity is not a helpful backdrop, but it does not mean my colleagues or I should drop the ball," said Doyle.

The good news, however, was that EU power generators would be made to pay for all their carbon emissions from 2013 -- a "polluter pays" scheme that has pleased green groups.

"This was a slap in the face to all the forces that want to weaken EU climate and energy policy," said Sanjeev Kumar of environment group WWF.

A key European Parliament committee has given its backing to strong European Union limits on the amount of carbon dioxide (CO2) new cars should emit in a dramatic turnaround from the expected result. (26.09.2008)

International delegates ended three days of meetings in Greenland on the Arctic region's importance in forecasting global climate change. They called for the harmonizing of international Arctic policies. (11.09.2008)

Meet the pilot who quit flying because of the climate crisis 08.08.2022