Top officials from the EU and Ukraine are getting together to discuss the situation in eastern Ukraine, as well as how to strengthen economic and political ties. 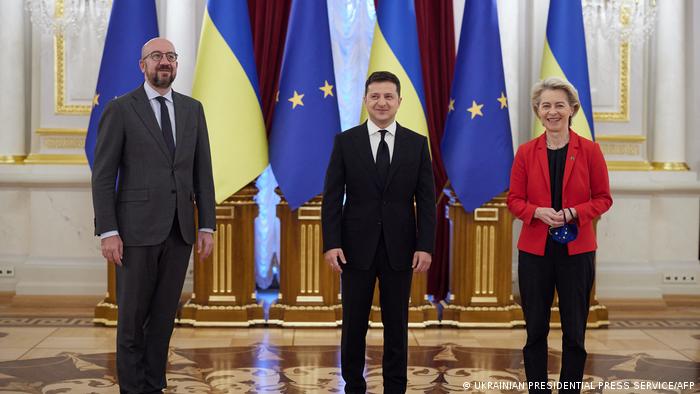 "We will also work closely with you [...] to increase gas supply capacity coming from member states of the European Union," von der Leyen said in a statement.

Her comments on gas supply come amid strong opposition in Ukraine to the new Nord Stream 2 gas pipeline between Russia and Germany.

Von der Leyen also committed to Ukraine's sovereignty and the Minsk agreements. Signed in 2014 and 2015, they sought to end Russia's war in eastern Ukraine.

They are discussing the worsening situation in eastern Ukraine as well as seeking to further strengthen economic and political ties.

What else is being discussed?

Tensions between Ukraine and neighbor Russia escalated again this year after Russian troops amassed on the Ukrainian border.

The EU and Ukraine also signed an aviation agreement to open the country to more low-cost air routes and boost tourism.

The Nord Stream 2 pipeline transports gas directly from Russia to Germany, bypassing Ukraine and other central and eastern European countries.

Ukraine is concerned that the pipeline's path will cause it to miss out on gas transit fees. This is despite a deal from Germany that sets out plans to boost investment in the country. Ukraine is also worried that the pipeline could increase Russia's political leverage in the region.

Further energy concerns sparked a bilateral row between Ukraine and its EU neighbor Hungary last month, after Budapest signed a new long-term energy deal with Russia that sidelined Ukraine as a transit country. The deal also brings into question Ukraine's ability to take reverse flows of Russian gas from Hungary.

This is story will be updated as more details become available.