After new talks on Saturday, EU Parliament President Martin Schulz is optimistic the EU and Canada will sign a long-sought trade deal next week. Talks had broken down after opposition from a region in Belgium. 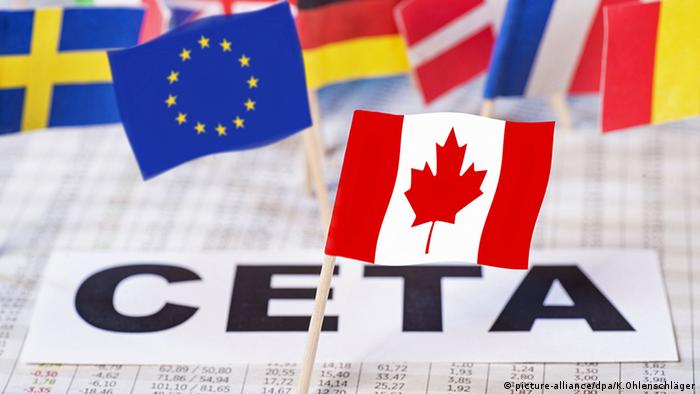 EU Parliament President Martin Schultz said on Saturday that he hoped the EU would overcome protests from the Belgian region of Wallonia, which is holding up the signing of the CETA trade deal with Canada.

"I am very optimistic that we can solve the problems that we have within the European Union," Schulz said after meeting Canadian Trade Minister Chrystia Freeland on Saturday morning and before talks with Belgium's Walloon leader Paul Magnette.

Following his own 11th hour talks with Schulz, Belgium's Walloon leader Paul Magnette acknowledged that his devolved region still stands in the way of the deal but was cautiously optimistic that the standoff could be resolved within days.

"I think it's worth taking a little more time," Magnette said, despite what he said were "some small difficulties."

Schulz appeared equally hopeful following his discussions with Magnette, saying that "none of the stumbling blocks ... are insurmountable."

Wallonia continued to block the landmark agreement on Friday, after its regional parliament voted against the free trade deal.

Canada's Freeland postponed her planned return to Canada on Saturday to take part in compromise talks with Schulz. She said Canada was willing to "stop the clock" until the EU had solved its internal problems, Schultz told German broadcaster ARD.

Belgium's regional government of Wallonia continues to block the EU-Canada trade deal and wants to delay its signing. Europe has been left standing disgraced at the end of its summit, writes DW's Barbara Wesel. (21.10.2016)

At an EU summit in Brussels, Belgium's Wallonia region has again rejected a proposed free trade deal between the EU and Canada, known as CETA. It says that its demands are not being met. Brussels is losing its patience. (21.10.2016)

EU leaders have ended a Brussels summit without agreeing on a free trade deal with Ottawa as Belgium's region of Wallonia refused a last minute offer. Canada's trade minister said the deal was "impossible" at the moment. (21.10.2016)

"The ball is in Europe's court. We hope that it is possible to find a solution," Freeland said upon arriving at the parliament building for Saturday's talks, Belga news agency reported.

On Friday, Freeland walked out of discussions in Brussels, declaring that the EU was incapable of sealing the deal. She said it was "impossible" to overcome opposition from Wallonia.

German Economy Minister Sigmar Gabriel said he was also optimistic about negotiators being able to reach a deal. The Economy Ministry said on Saturday that Gabriel had played a role in convincing Freeland not to return to Canada as planned.

Gabriel added that Belgian politics should not be allowed to hold the entire trade deal hostage.

"This is a domestic European problem and a domestic Belgian problem and not a problem for Canada. CETA is an excellent deal and it can't fail because of Europe's incompetence at finding a way to balance interests between regions," he said, according to his ministry.

All 28 EU governments support the Comprehensive Economic and Trade Agreement (CETA), but Belgium cannot give its assent without backing from its five sub-federal administrations, and French-speaking Wallonia has steadfastly opposed the trade deal.

CETA is supposed to be signed at an EU-Canada summit next week in the presence of Canadian Prime Minister Justin Trudeau.

But unless the Belgian region gives its go-ahead to the deal, the country cannot approve it and neither the ceremony cannot nor the deal itself will proceed.

CETA is designed to ease the flow of goods by removing tariffs and trade barriers between Canada and EU member states. It is expected to increase trade by about 20 percent.

Wallonia continued to have concerns about the threat of surging pork and beef imports from Canada and an independent court system to settle disputes between states and foreign investors, which critics have said may be used by multinational corporations to dictate public policy.

Many EU leaders also suspect the local government in Namur of using its devolved powers to play domestic politics.