EU brings youth orchestra back from the brink

The EU Youth Orchestra has been saved at the last minute with the EU announcing its renewed support. Threatened with closure after its funding was withdrawn, the orchestra's future was secured with "creative solutions." 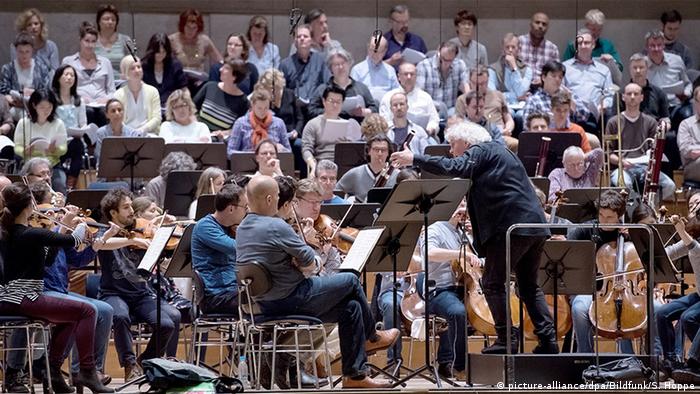 The European Union Youth Orchestra (EUYO), in danger of packing up its instruments for good this summer after its EU funding was withdrawn earlier this year, has been saved by a last-minute decision by European Commission President Jean-Claude Juncker.

In a statement in May, the EUYO announced that its Creative Europe partnership had been canceled, leaving it with no choice but to "cease operations on September 1."

But on Wednesday (01.06.2016), Juncker's spokesperson announced that he had asked the responsible commissioners and the European Parliament to come up with an "immediate solution" to allow the orchestra to continue.

"Today, I am happy to announce that we have found a solution, which will allow the European Union Youth Orchestra to continue in 2016 and 2017 and even beyond," said Juncker in a statement. "Together we have shown that we can find creative solutions by overcoming bureaucratic procedures when something is in the interest of our citizens."

Since announcing its impending closure, musicians across Europe had rallied to the cause, tweeting their support and staging musical protests calling on the EU to continue supporting the orchestra.

The EUYO, a training orchestra for up to 140 talented young musicians from all 28 EU countries, has been funded by the European institutions since it was founded in 1976.

It has been led by a number of world-renowned conductors, including Daniel Barenboim, Leonard Bernstein and Simon Rattle.

The German National Youth Orchestra is on tour in Germany with talented young musicians aged 14 -19. Sarah Willis is delighted to spend time with them and reminisce about how wonderful it is to play in a youth orchestra. (29.04.2016)

Just as the number of classical music lovers is expanding in China, Germany's National Youth Orchestra has broken records of attendance during its tour there. Some cultural quirks can be surprising for Europeans. (24.09.2015)

For the third consecutive year, DW and the Beethovenfest Bonn are hosting a Turkish youth orchestra in Germany. A chamber ensemble gave a sneak peek at the orchestra's talents ahead of next week's Beethovenfest concert. (19.09.2014)