EU begs citizens to reject extreme nationalism on European Day of Remembrance for Victims of Stalinism and Nazism | News | DW | 23.08.2017

Countries across Europe are marking a day that Russia is reticent about discussing. The EU is calling for its people to reject extremism, intolerance and oppression. 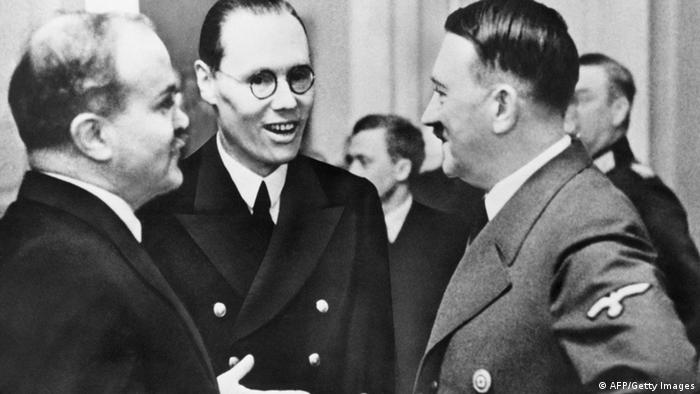 The European Commission pleaded with its citizens to reject extreme nationalism, xenophobia and hatred in a statement on Wednesday issued to mark the anniversary of the German-Soviet Nonaggression Pact.

The EU's executive arm used the day to remember the victims of the Nazi and Soviet regimes and restated its rejection of the ideologies they were built on.

"The European Union was built on the common values of human dignity, fundamental rights, rule of law and democracy, and on the rejection of extreme nationalism," the statement said.

"We must never take these rights and freedoms for granted. We pledge to fight for them every day.

"Extremism, nationalism, xenophobia and hatred can still be heard in public speech in Europe. Keeping these memories alive is not only a tribute to the victims but also a way to ensure that these ideologies can be forcefully rejected and such atrocities never happen again.

"We stand firm in our defense of democracy, the rule of law and fundamental rights, in Europe and worldwide. There is no place in the European Union for extremism, intolerance and oppression."

August 23 is celebrated as the European Day of Remembrance for Victims of Stalinism and Nazism or Black Ribbon Day. It commemorates the signing of the neutrality pact between Nazi Germany and the Soviet Union that led to the joint invasion of Poland by the two powers, shortly followed by World War II.

Facing an invasion on two fronts, Poland's armed forces were defeated and the country was carved up between the Russia and Germany with a small portion being returned to Slovakia.

The pact lasted less than two years, collapsing when Hitler attacked the Soviet Union in June 1941.

Poland's international embassies posted messages memorializing the signing of the pact on Wednesday.

Russian outlets were rather less vocal about the day, instead choosing to memorialize the Soviet defeat of Nazi forces in the Battle of Kursk.

Estonia, which holds the rotating presidency of the European Council, held a conference Wednesday to investigate the crimes committed by communist regimes. Greece was the only European country to turn down its invitation to the conference titled "The Heritage in 21st Century Europe of the Crimes Committed by Communist Regimes," saying it was an attempt to whitewash history.

"We have never believed that communism is a criminal ideology like Nazism," the Greek Justice Minister said in a letter to the conference organizers. The rejection was gleefully picked up by Russian state news agency Sputnik.

Tens of millions of people were deported, tortured and killed under the totalitarian regimes that were memorialized on Wednesday.