Exactly 65 years ago, on Sept. 1, 1939, German troops crossed the border into Poland. The attack caused the outbreak of World War II -- the single biggest catastrophe of the 20th century. 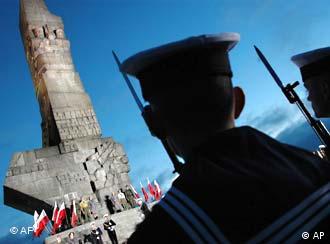 "Tonight for the first time, Poland fired shots against our territory and regular soldiers. We have been returning fire since 5:45 a.m. And from now on, we will retaliate, bomb for bomb." 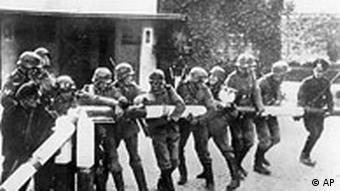 As Nazi Germany starts the invasion of its neighbor Poland in the early morning hours of September 1, 1939, these German soldiers tear down a barrier at the German-Polish border, at an unknown location.

With these words on Sept. 1, 1939, Adolf Hitler announced that German troops had marched into Poland. The evening before, SS soldiers disguised as Poles attacked the radio station of Gleiwitz, a town on the German-Polish border, and transmitted a message for the Polish minority in the region to take arms against the Germans. This fictitious act of aggression was to serve as an alibi for the attack on Poland.

Hitler had long been on the warpath. Fifteen years previously, he wrote in his book "Mein Kampf," that the Germans should seize more Lebensraum -- living space. Besides, his rationale went, peace between populations was impossible. Only war could determine survival.

Relations with Poland were already strained during the Weimar Republic, due to the 1919 Treaty of Versailles, which laid down territorial acts of transfer to Poland. The state of East Prussia was separated from the German Reich by a Polish corridor, something barely any German politicians were prepared to accept.

When the National Socialists took power in 1933, Hitler pursued closer ties to Poland for tactical reasons -- he wanted to create an impression, at least to outsiders, of his readiness for peace. In 1934, he signed a pact of non-aggression with Poland.

"There may be differences between our two countries in future, but the catastrophic effects of trying to solve them through actions of war would in no way be in proportion to any possible gain," Hitler said. "The German government was therefore pleased to find that the leader of the Polish state, Marshall Pilsudski, shares this opinion, and that this mutual realization has been turned into a contract, that won't just be of equal use to the Polish and German peoples, but also will contribute significantly to the preservation of peace generally."

But the truth was that peace was not on Hitler's agenda. Instead of pursuing peace, he fuelled his plans for expansion. In 1938, Austria was annexed by the German Reich, then Czechoslovakia -- both without any military resistance.

Poland's fate was sealed when, at the end of August, 1939, Hitler surprisingly negotiated a pact of non-aggression with Stalin. In a secret protocol, it was decided -- Poland would be divided up between Germany and the Soviet Union. Just one week later, Germany marched on Poland. 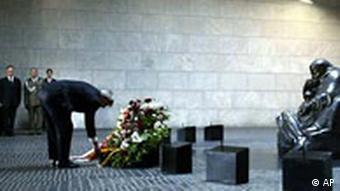 Although the Polish government knew of Germany's war preparations, the attack came as a surprise. In the early morning hours of Sept. 1, the German battleship "Schleswig-Holstein" opened fire on the Polish city of Danzig. Hours later, Hitler spoke in front of the Reichstag assembly.

"Those who distance themselves from the rules of humane warfare can expect nothing else from us but that we do the same," he said. "And I will lead this war -- no matter whom we fight -- until such time that the security of the Reich is guaranteed."

Sixty years later, the D-Day landing of Allied troops in Normandy on June 6, 1944 is ever-present. The area has become an important tourist destination for visitors and veterans from throughout the world. (June 4, 2004)

Speaking at an event in Warsaw to commemorate the 1944 uprising against the Nazis, Chancellor Gerhard Schröder made clear that his government did not endorse German claims for the return of ancestral property in Poland. (Aug. 2 2004)