As lenders decide on Greece’s post-bailout future, some say it may not differ much from its bailout present: targets, compliance and disbursements. DW talked with Alexander Kritikos, an expert on Greek political-economy. 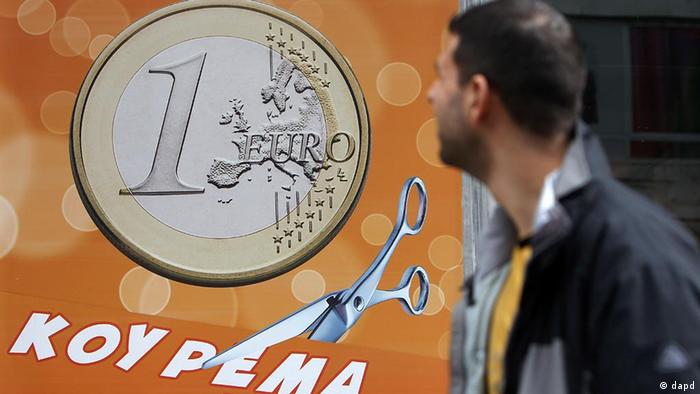 Eurozone finance ministers decide on Thursday how much debt relief to give Athens in return for its compliance with economic reforms over the last three years.

The aim of the Luxembourg meeting is to ensure Athens will be able to finance itself, bearing in mind that Greece still has to service a debt of 180 percent of GDP, the highest in the 19-member currency bloc. And with growth expected at 1.9 percent this year the task facing Athens could be described as, well, Herculean.

Expectations are that a loan payment of between €10 billion ($12 billion) and €12 billion will be agreed, in addition to a cash buffer of up to €20 billion that would provide liquidity until the end of 2019.

Read more: Greece due to exit bailout in August: creditors

Athens, advised by Rothschild & Company, could then choose the right moment over the next two years to re-enter the sovereign bond market, with the ECB expected to reschedule some of Athens' existing debt, pushing repayment dates back on the €130 billion lent to Greece under its second bailout to the 2030s and 2040s.

Crucially, however, loan write-offs are not expected.

European Commissioner for Economic and Financial Affairs Pierre Moscovici called on Thursday for what he called "a balanced compromise between all actors, ensuring growth and sustainable debt for the future, meaning measures to lighten Greece's debt burden, which must be put on a sustainable path."

But therein lies the rub: Can Greece stand on its own feet for the first time since its financial meltdown in 2010 after it exits its latest bailout on August 21?

"At the moment Greece is not borrowing on the credit markets, having dipped its toes in two months ago, before the Italy crisis changed things," Kritikos said.

"Most people in the market think a 5 percent yield is the minimum lenders will demand to lend Athens more money," Kritikos said. "And this is not sustainable. Anything below Greece's growth rate of about 2 percent is unsustainable. I don't think Greece will return to the market until the Italy situation calms down," he added.

Since Italy formed an anti-euro government in May investors have been selling Greek government bonds, driving prices down and yields, a key measure of creditworthiness, up. The government's cost of borrowing has in turn also been driven up.

Although the interest rate, or yield, on Greece's benchmark 10-year bond has fallen to a 4.5 percent, still far higher than benchmark German bonds, it is still way down on its 2010 highs, that is to say, lows.

Déjà vu all over again

European creditors have lent a total of €241.6 billion to Greece to date, while the IMF disbursed an additional €32.1 billion during the first two bailout programs.

After understating its budget deficit figures in 2009, Greece was unable to borrow funds on commercial markets and was on the verge of insolvency by 2010. In May 2010, eurozone countries agreed to its first rescue package, bringing together just under €53 billion ($61.4 billion) in bilateral loans. The International Monetary Fund (IMF) also lent an additional €20 billion.

In March 2012, euro-zone countries and the IMF approved a second bailout package  for a total of €153.8 billion.

These bailouts went hand-in-hand with austerity measures, the country being required to carry out far-reaching reforms. By 2014 the Greece economy had started to grow and Athens was able to raise money in the markets again.

An election in January 2015 brought the leftist Syriza party, led by Prime Minister Alexis Tsipras, into power. Tsipras said he would renegotiate the bailout terms and suspend the reform program, but this shunted the economy back into recession.

But in August 2015 Greece missed its IMF debt payments and Athens and its European creditors agreed to a third bailout package worth €86 billion under the European Stability Mechanism (ESM).

Greece is on strike

Politics in the way, again

"The markets are not very optimistic that any government will be able to negotiate this situation now," Kritikos continued.

"The conservatives when in power in 2014 didn't manage to do the things lenders want for Greece, in particular a 5-percent hike in VAT, cutting red tape, judicial reform and higher tax collecting rates," Kritikos said. "The key for the long-term health of the Greek economy is increasing the share of companies producing for export."

Since 2015 Athens has delivered on 88 reforms to every element of its often painful economic and social programs from welfare and pensions to a new land registry system, privatizations and dealing with banks' non-performing loans. Public service numbers have been cut by a quarter and the public sector wage bill is down 39 percent.

"The Greeks are to blame."

Eurozone finance ministers are also considering the return to Athens of profits made by the German central bank on its Greek bond holdings.

Loans and bonds purchased to support of Greece since 2005 have resulted in profits of €2.9 billion ($3.3 billion) for the German central bank, the German government said in response to a parliamentary question by the opposition Greens. Sven-Christian Kindler of the Greens said the income should warrant a debt cut for Greece.

Germany's central bank, the Bundesbank, received a €2.9-billion income from its Greek bail-out program, which it transferred to the national budget, including a €400 million profit generated from a 2010 loan by state-owned development bank KfW to the Greek government.

"The very same discussion happened in 2017 when the Bundesbank was reported to have profited by €1 billion," Kritikos said.

"The Greeks complained at that time, but when you lend money it seems quite obvious that you charge interest," Kritikos said. "However, the key here is a 2014 agreement that the ECB would pay Athens back any interest accrued on the original 2010 loans. This was torn up in 2015, when Athens defaulted, but is likely to be back on the agenda again now."

"This interest is about 1.5 to 1.8 percent of Greece's overall debt, depending on how you calculate it," Kritikos said. "So, returning to the 2014 agreement should it happen would be a signal of a regaining of trust between the government and lenders. The narrative is that Greece is regaining its autonomy," Kritikos said.

At the moment, if it is agreed to return the interest payment, this would likely go on directly reducing public debt or providing a mini-buffer against any market shocks," Kritikos said.

Keeping an eye on Athens

European creditors are expected to put measures in place, such as post-program surveillance and debt relief, to ensure stability.

The eurozone is also expected to demand quarterly reviews of the Greek economy to check if the agreement is being upheld and if it notes failure to meet on commitments could include a clause making the whole debt relief arrangement null and void.

Visits from the commission are expected to continue until Greece has paid back 75 percent of the €230 billion it owes its euro-zone creditors.

Greece to choose between austerity and change in parliamentary polls

Greek voters are going to the polls in an election that is being closely watched all over the EU. The vote could result in a party taking power that wants to renegotiate the terms of Greece's international bailout. (25.01.2015)