EU Approves Long-Delayed Mission to Chad | Europe | News and current affairs from around the continent | DW | 28.01.2008

The European Union's foreign ministers gave the order to launch the EU's security mission to Chad and the Central African Republic, putting an end to months of wrangling. France is slated to contribute the most troops. 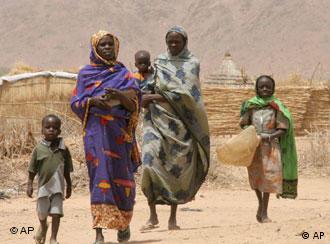 At their regular monthly meeting, the union's 27 foreign ministers on Monday, Jan. 28, authorized the force's commander, Lt. Gen. Patrick Nash, to order the deployment of his troops.

"In conducting this operation the EU is stepping up its long-standing action in support of efforts to tackle the crisis in Darfur and to address its regional ramifications," the foreign ministers said in a statement.

The force, which is to provide security for locals and UN aid teams in eastern Chad and the north-eastern Central African Republic along the border with the war-torn Sudanese province of Darfur, was proposed by France and approved in concept by EU leaders on Oct. 15.

However, arguments then broke out over the resources which each member state should commit to the operation, with the EU's 27 nations initially unable to scrape together the helicopters and transport planes needed to support the 3,700-man mission.

Hundreds of thousand have been uprooted by violence in the region

That obstacle was finally overcome in early January, when Russia and Ukraine -- neither of which is an EU member -- offered to provide the missing hardware.

The backbone of the "bridging operation," which is mandated to run for a year, will be made up of an estimated 2,000 French troops. However, the appointment of Nash -- an Irishman -- guarantees the multinational nature of the force, diplomats said.

Ireland and Poland are set to send some 400 troops each. The deployment is expected to begin in March, with the mission coming up to full strength by May 1.

Nash is set to control the operation from the Mont Valerien military base in France. Actions on the ground will be commanded by French Brigadier-General Jean-Philippe Ganascia.

France will fill the gaps in a European peacekeeping force for Chad and the Central African Republic. Belgium and Poland will also contribute to make up the shortfall in troops and equipment needed to launch the mission. (11.01.2008)

A group of well-known European and African writers criticized leaders from the two continents for not addressing the situations in Zimbabwe and Darfur at an upcoming bilateral summit. (04.12.2007)

EU Agrees to Stronger Sanctions on Myanmar, Troops for Chad

The EU will increase its pressure on the military junta in Myanmar by strengthening sanctions in response to the pro-democracy crackdown last month. The bloc also agreed to send an EU security force to Chad. (15.10.2007)

Do you think the EU troops will be able to calm the situation in Chad, CAR and neighboring Darfur? Send us your comments and please include your full name and country in your reply.