EU agrees on plan to boost jobs and growth | Europe| News and current affairs from around the continent | DW | 26.03.2010

EU agrees on plan to boost jobs and growth

After two years of economic meltdown, EU heads of state at a summit in Brussels have agreed to a set of key areas to focus on as the economic bloc moves from recovery to sustained growth. 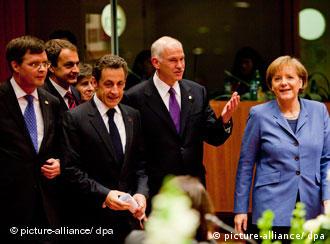 At a European Union summit in Brussels, the leaders of the 27 member countries have laid out a plan to improve economic policy coordination and bring more jobs and growth to the entire EU.

Earlier, the EU Commission published a communication titled 'Europe 2020: a strategy for smart, sustainable and inclusive growth,' which the Council discussed on Friday, the second day of a two-day summit. 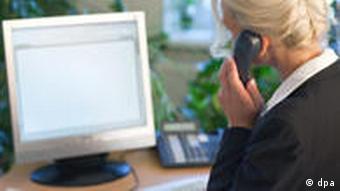 The leaders agreed on several key elements, including a target of 75 percent employment for men and women aged 20 to 64, combined public and private investment into research development of three percent of each country's gross domestic product, increasing the proportion of EU citizens with college degrees or higher, decreasing the number of school dropouts and coordinating efforts to reduce poverty.

According to the Spanish Equality Minister Bibiana Aido, whose country currently holds the rotating EU presidency, male employment is currently 76 percent in the EU, while only 63 percent of women work.

German Chancellor Angela Merkel had fought against the inclusion of poverty reduction in the agreement, saying ahead of the summit that such social policy measures should be taken up by the individual states. But EU Commission President Jose Manuel Barroso and EU Council President Herman Van Rompuy have both pushed for an EU-wide poverty reduction goal.

The statement released after the summit also pushed for a greater emphasis on renewable energy and the efficient use of energy as part of the economic plan for Europe. The text reiterates the EU's '20-20-20' plan from 2007, which calls for a reduction of greenhouse gas emissions by 20 percent compared to 1990 levels, increasing the proportion of renewable energy to 20 percent of all energy sources, and a 20 percent increase in energy efficiency, all by the year 2020. 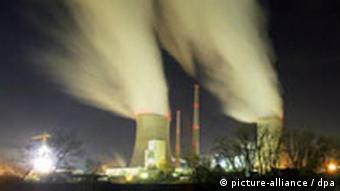 The EU leaders also agreed to an approach to the next major United Nations climate talks in Cancun, Mexico later this year, following the failed talks in Copenhagen last December.

"It is now necessary to bring a new dynamic to the international negotiation process," the leaders said in their agreement.

There was a marked lack of optimism in their goals for Cancun. The leaders said the next meeting "should at least provide concrete decisions anchoring the Copenhagen Accord to the UN negotiating process and address remaining gaps," the statement said.

The final agreement also said the EU was "committed to [taking] a decisive step to a 30 percent reduction (in greenhouse gases) by 2020 … provided that other developed countries commit themselves to comparable emissions reductions and that developing countries contribute adequately according to their responsibilities and respective capabilities."

That wording is very close to the original statement from 2007, but it almost didn't make it into Friday's agreement. An earlier version of that goal was eliminated over protests from Italy and Cyprus. It was then reinstated with the conditional language requiring other developed countries to make similar cuts.

After the Copenhagen talks, in which wealthy countries failed to promise 30 percent cuts, some EU nations have said the EU could put more pressure on other world powers if they went ahead and adopted the 30-percent target now. The countries that supported this plan included Sweden and Great Britain.

Distracted by the Greek crisis

These new strategy elements are set to be formally adopted in June. The Europe: 2020 talks were almost sidelined by the ongoing debt crisis in Greece, which took up the entire first day of the meeting.

But a pre-summit meeting between Merkel and French President Nicolas Sarkozy led the way to an aid deal for Greece combining loans from euro-zone countries and the International Monetary Fund, if Greece is not able to raise the necessary money on its own.

The 16 countries of the euro zone have reached a deal on a backup plan to aid Greece if it's unable to raise money to pay its debts through the international markets. The agreement gained praise across Europe. (26.03.2010)