EU finance ministers have agreed on a bailout fund for Ireland to tackle the country's huge budget deficit and save its banking sector. It's the second EU bailout package this year. 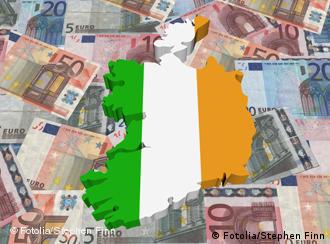 European Union Finance Ministers agreed on Sunday to fund a massive bailout package for member state Ireland, just hours after Ireland announced it would ask the EU and the International Monetary Fund (IMF) for help in tackling its huge budget deficit and save its struggling banking sector.

"Irish banks will become significantly smaller than they have in the past, so that they can gradually be brought to stand on their own two feet once more," Irish Prime Minister Brian Cowen told a news conference.

"The second key element of the agreement will be a program to reduce our budget deficit. Put simply, the government has to increase our taxes and reduce our spending to levels we can afford."

The exact size of the bailout has not been specified, but Cowen said it would be less than 100 billion euros ($137.4 billion). 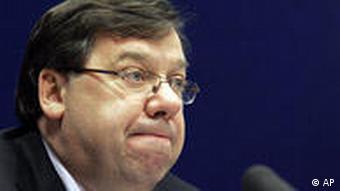 German Finance Minister Wolfgang Schaeuble said on Sunday that the terms of the deal would be "tough." Details are to be worked out in the next few days, "so that it's not just a shot in the arm, but that it will also help to solve the problem," he said on German television.

Irish officials had been holding talks with representatives from the EU, the IMF and the European Central Bank since Thursday. Ministers are to meet this week to finalize austerity measures aimed at saving 15 billion euros by 2014.

Ireland's budget deficit is set to hit an eye-watering 32 percent of gross domestic product, way in excess of the EU's three percent limit. Its banking sector was left reeling after a property boom that fueled reckless lending practices turned to bust, leading to a multi-billion euro bailout of its largest financial institution, Anglo-Irish Bank.

The announcement came after intense criticism from the ranks of the ruling party, Fianna Fail, as well as the opposition about the way the government has handled the crisis.

"Fianna Fail as a party must change and it must call an election, even if it means we will lose power," Fianna Fail lawmaker John McGuiness wrote in the Irish Mail on Sunday newspaper. "[Prime Minister] Brian Cowen must step down," he added.

Ireland has also been under fire internationally for holding on to its very low corporate tax rate of 12.5 percent, which countries like Germany believe gives Ireland an unfair advantage in attracting investment, while at the same time taking advantage of EU and IMF funds.

But Lenihan and Cowen reiterated on Sunday that talks on the tax rate "are not on the agenda."

Ireland's ambassador to Germany, David Mulhall, also defended the low tax rate. "To force Ireland to change its tax system would be counter-productive, because first and foremost, what Ireland needs in the next few years is strong growth," he told German daily Tagesspiegel. 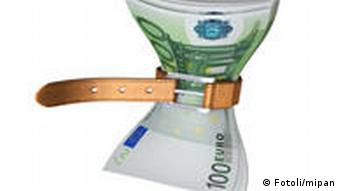 Other eurozone nations are wary about the future

Pessimism seemed to be the prevailing attitude in other troubled member states.

"I think it means Portugal is next [to request help]. I don't know if it will happen before the end of the year or after, but it's almost inevitable now," Filipe Garcia at Informacao de Mercados Financeiros in Porto told Reuters.

"I don't know what the markets will say tomorrow," said Pedro Schwartz at San Pablo University in Madrid. "If Portugal is forced to take a bailout then they'll turn their attention to Spain ... I think Spain is differentiated but they're not out of the woods. And the euro in general is not out of the woods."

"The coordinated action of European countries and the IMF reflects our shared resolve to act swiftly and decisively to mitigate emerging risks, maintain market stability, and safeguard the global recovery," they said in a joint statement issued by Canada's Finance Ministry.

The euro rallied based on news of the bailout, passing 1.37 dollars in Asian trading. The euro had faced heavy selling recently due to concerns over Ireland's debts' impact on the economic bloc.

Opinion: Ireland needs to accept help the sooner, the better

Ireland is still sidestepping what experts say is inevitable: a bailout

Will Ireland accept a bailout and help reverse a bond sell-off among the eurozone's deficit-laden nations? The country is still refusing but so did Greece before it bowed to pressure. (15.11.2010)