Ethiopia's new prime minister, Abiy Ahmed, may have to do more to convince thousands of refugees belonging to the Anuak ethnic group to return to their homelands.

It took Okwalla Ochang Cham (above with his family) two years to complete the dangerous journey from his home country of Ethiopia to South Sudan. "I had no money for transport up until South Sudan so I had to walk most of the way," he told DW.

In April, Cham finally reached his destination – the Gorom refugee settlement, some 25 km north of South Sudan's capital of Juba – where he was reunited with his wife and three children.

Cham, 29, is relieved to be in the relative safety of the camp.

He's an Anuak, an ethnic minority group living in western Ethiopia in the fertile state of Gambela, which borders South Sudan.

For decades, the Anuak have experienced government persecution, alongside conflicts with other ethnic groups who were forcibly resettled to the region. Most recently, investment projects such as sugar cane production have led to the Anuak losing large areas of ancestral lands to foreign corporations – intensifying local violence.

But the situation in Ethiopia has been changing rapidly since the country's new prime minister, Abiy Ahmed, took office in April. Abiy has lost no time ushering in sweeping reforms, from signing a historic peace deal with Eritrea to overturning a state of emergency and unblocking 264 censored websites and TV stations.

Abiy has also pledged political and economic reforms to address the marginalization of a number of ethnic groups.

Despite the changing political climate, inter-ethnic violence persists. Renewed conflict in the south of the country has forced more than a million people to flee their homes since April, according to the United Nations.

Ethiopia also has a long history of human rights abuses, including mass arrests and brutality by security forces. Speaking before parliament in June, Abiy condemned the security service's use of torture and described it as a form of "terrorism."

While Abiy has made "little mention" of investigating past abuses, the recent firing of five prison chiefs accused of torture and other violations is an encouraging sign for the human rights situation in Ethiopia, wrote Felix Horne, the senior Ethiopia and Eritrea researcher for Human Rights Watch, in an email to DW.

However, Horne wrote, it wasn't "clear yet whether things will be better for minority groups like the Anuak under this [new] government."

Cham, who spent several years in an Ethiopian prison accused of being an Anuak rebel, isn't convinced it's safe for Anuaks like him and his family to return home.

"What I know is that if the government system is still there, it hasn't changed. If they change the prime minister but the system hasn't changed, there will still be problems [in Gambela]," Cham said.

One of nine ethnic regions in Ethiopia, Gambela is the indigenous home of the Anuak, but the area's native population is outnumbered. Since the 1990s, other Ethiopians, primarily from the Nuer ethnic group, have been relocated to the region.

In more recent years, these numbers have swelled due to South Sudanese Nuer refugees fleeing civil war. In addition, large tracts of Anuak communal land have been sold to foreign investors. This has heightened existing tensions over land, identity and power between the Nuers and the Anuak minority.

"Reforms announced so far will have little impact in places like Gambela," researcher Horne wrote to DW, "and there is little indication so far that key issues for minorities, including how their lands are used for investment, will be any different under the new government." 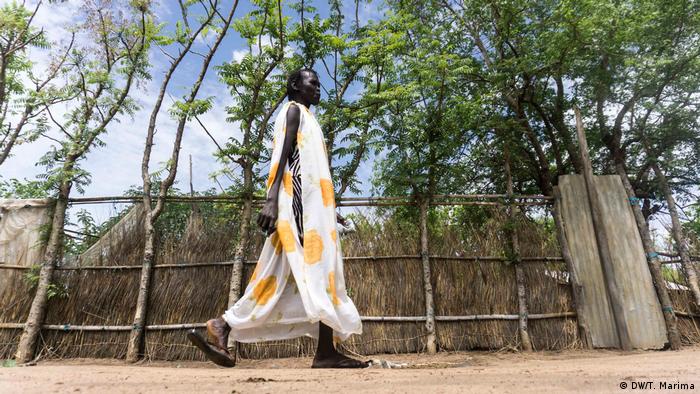 Before she fled to Gorom, Akwata Umot Okok was a farmer in Gambela

For Akwata Umot Okok, an Anuak living at the Gorom refugee camp, land is an issue close to her heart. She was a farmer before she fled to Gorom camp 14 years ago. Since then, she has survived on limited food rations and minimal income. But still, she is unsure about returning home.

"It depends on the condition which is there in Ethiopia. If Ethiopia is now free, then I will go back. But if it is not, I will not go," the mother of four said.

Trapped between war and uncertainty 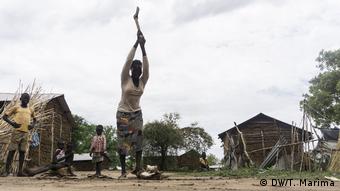 When fighting in South Sudan's civil war flares, such as it did in July 2016, the camp's residents face a greater risk of attacks.

Omot Obang Kwot, who left Ethiopia in December 2003 for what was then Sudan, says groups of refugees have been ambushed by gunmen outside the camp.

"If [South Sudan] continues to be at war, then our life here may become difficult and we may not even prosper," he said.

Tendai Marima is a freelance journalist and researcher covering sub-Saharan Africa. She reported from Gorom refugee settlement in South Sudan.

The plight of Ethiopia's Anuak refugees

For decades, members of the Anuak ethnic minority in Ethiopia have suffered from government persecution. Many fled to neighboring South Sudan. Ethiopia is now trying to bring them home. How are they faring? (12.07.2018)