Clashes broke out at Eid celebrations in Addis Ababa after police fired tear gas into the crowd. Religious tensions have been high since a recent attack on a Muslim funeral. 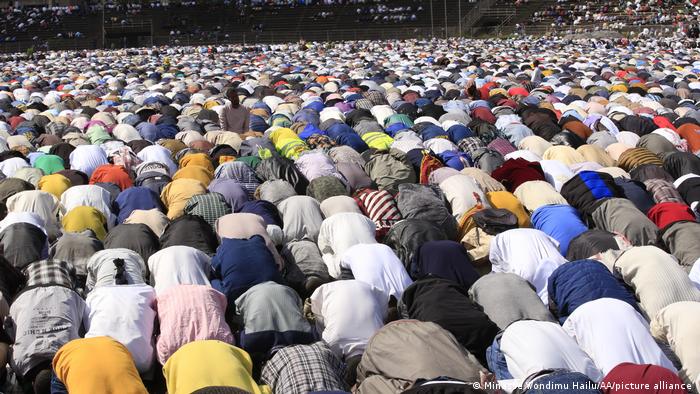 Hundreds of thousands of Muslims had gathered for the Eid prayers

Muslims marking the end of the Islamic holy month of Ramadan were hit with tear gas in the Ethiopian capital of Addis Ababa on Monday as protesters clashed with police.

Hundreds of thousands had gathered to celebrate the Eid al-Fitr holiday which marks the end of a month of fasting.

However, during the prayers, some attendees began protesting the killing of at least 12 Muslims in a majority Christian city of Gondar last week.

Eyewitnesses said that several people were arrested in the clash. Images on social media showed the historic Meskel Square deserted after the incident.

Police label the unrest 'a riot'

Some worshipers had been forced to use to square to pray after not being able to get into a stadium where the official celebrations were taking place.

A member of the Addis Ababa High Council of Islamic Affairs told AFP that the cause of the clash was not clear. A police officer had fired a round of tear gas at the crowd, but this was reportedly unintentional.

The capital's police said that a "few individuals" had caused a "riot" that had damaged property.

Journalists at the scene reported seeing protesters throwing stones at police and shouting "Justice for Gondar."

The Islamic Affairs official said that this was "the first time such incidents happen" since the yearly tradition began in 1991, following the fall of the military Derg regime. He added that police had checked none of the attendees were carrying weapons.

What happened in Gondar?

Tensions between the countries two main religious groups — Christians and Muslims — have been heightened since the attack on a Muslim funeral service in Gondar on April 26.

The assailants were still unknown, but a local Islamic group said it was a group of heavily armed "extremist Christians."

While Ethiopia is majority Christian — with most belonging to the Orthodox Church — some 30% of the population is Muslim.

The country has also been mired in violence since war broke out between the central government and fighters from the northern Tigray region.

Ethiopia's Tigray conflict: Rape as a weapon of war