The bomb blast in Ethiopia's capital, Addis Ababa on Saturday has been described by many as an affront to peace and stability raising fears that the country might plunge into political turmoil. 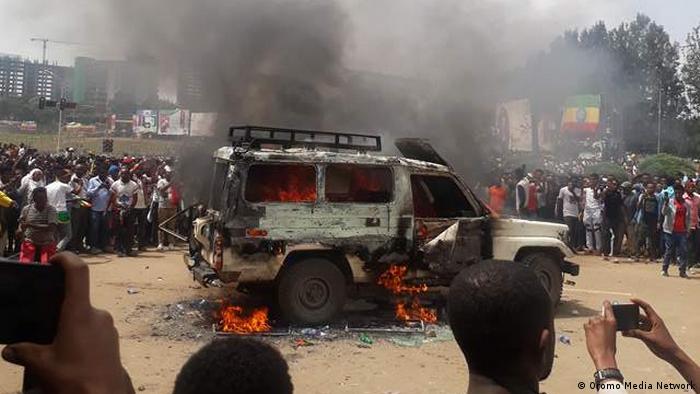 The blast that happened shortly after Prime Minister Abiy Ahmed had addressed a rally, left scores injured and one person dead. Eyewitnesses told DW that there was blood everywhere and chaotic scenes. DW also spoke to Hallelujah Lulie a regional security analyst who was at the rally when the blast happened.

DW: What could be the motive behind this attack?

Hallelujah Lulie: I think it is too early to tell the motive and who could be behind the attack. We have to wait until investigations are concluded on what kind of bomb was used and who was behind it.

The organizers of the rally has said that Prime Minister Abiy Ahmed was the target. Could there be some people who are not happy with the prime minister's new way of governance and why?

Yeah, not only the organizers but also some members of his party say that it was an attempt on the life of the prime minister. They are trying to relate it with the kind of radical restructuring of his new policies, and are also pointing a finger on disgruntled groups who could be in the military or the intelligence or political groups that are not happy with the kind of changes that Abiy has made. But like I said earlier, it's too early to tell and point a finger at anyone.

Shortly after the incident, the prime minister himself called for peace, unity, and forgiveness of anyone who could have been behind the attack and even went a step further to send condolence and sympathy messages to the families of the injured. What does this tell us about the character of Ahmed?

I think his message definitely resonates well with the masses that went out to support him and the reforms he is undertaking. We are not sure yet who could be behind this (attack) but there are lots of possibilities.  It could be al Shabaab, an individual or organization. We can't tell whether his message resonates with the people behind the attack because we don't know them yet.

Eritrea that is Ethiopia's neighbor,  has condemned the blast. Are you surprised by this rather friendly message of support from a country that Ethiopia has been at loggerheads with?

Not really, I think it was somehow expected you know with the kind of changes happening in Ethiopia, and with the decision to accept the decision by the joint boundary ( that was set up to mediate the border conflict between Ethiopia and Eritrea). There's a change of guard happening in Ethiopia. It was a kind of olive branch that was very difficult to reject and it was also the role of mediators from the region and beyond. So it's not a surprise for me that the government of Isaiahs Aferwki welcomed the peace initiative from Addis.

Could Ethiopia slip in anarchy?

It's unlikely that Ethiopia will slip into anarchy. Because, Ethiopia has a very long history of scuffles, and in the past, even at times of high-level crisis the state has proved resilient despite the political infighting and the serious differences within the ruling  Ethiopian People's Revolutionary Democratic Front (EPDPRF) coalition. We've also seen that they are mature enough to accept for example the election of Prime Minster Abiy Ahmed. So, I think for now it's hard to imagine such a scenario.

Hallelujah Lulie a regional security analyst based in Addis Ababa

One person has been killed and scores more injured in a grenade explosion at a rally for Ethiopia's new prime minister. The blast, in the capital Addis Ababa, caused panic among the tens of thousands of supporters. (23.06.2018)