Ethiopia's new prime minister is the first Oromo to head the ruling EPRDF coalition in the country's 27-year history. Some observers believe he can bring about change in conflict-ridden regions. 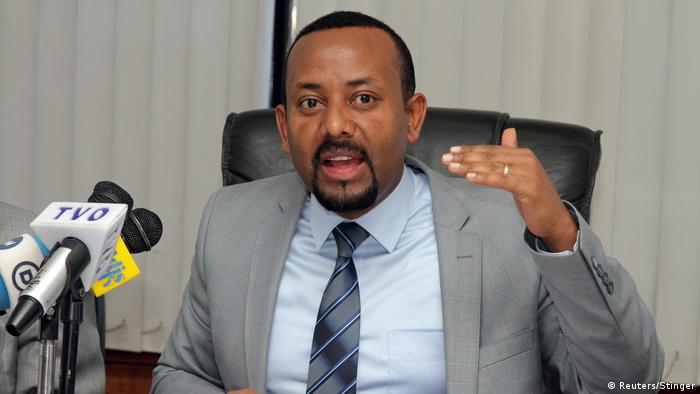 After weeks of negotiations behind closed doors, Ethiopia finally has a new prime minister. 41-year-old Dr. Abiy Ahmed Ali is set to be confirmed on Saturday, but he has already become something of a sensation. He is the first Oromo chairman of the ruling four-party coalition, the Ethiopian People's Revolutionary Democratic Front (EPRDF). Although the Oromo ethnic group makes up a third of the country's population of 105 million, so far they have always had a disadvantage against the older ruling Amhara group and the minority Tigre group. The latter have determined the country's political and economic fortunes for a quarter of a century and control both the military and intelligence services.

The multilingual Abiy was born in 1976 in the Jimma region of western Ethiopia, the son of a Muslim father and a Christian mother. When violent unrest broke out between the two religious communities he actively engaged in a peace forum for reconciliation.

While still a teenager, Abiy reportedly joined the resistance movement against the "Red Terror" regime of Mengistu Haile Mariam. After its demise he joined the Ethiopian army in 1993, where he first worked in the intelligence service and rose to the rank of lieutenant colonel. After the Rwandan genocide of 1994, he was deployed as a member of the United Nations peace mission and later served in the border war between Ethiopia and Eritrea.

Seyum Teshome is an Ethiopian blogger and university lecturer who was arrested by security forces in early March. Shortly before, he told DW he had previously praised Abiy's qualities. "He has been overwhelmingly accepted by members of the opposition parties. He has strong willpower, great charisma and great credibility." 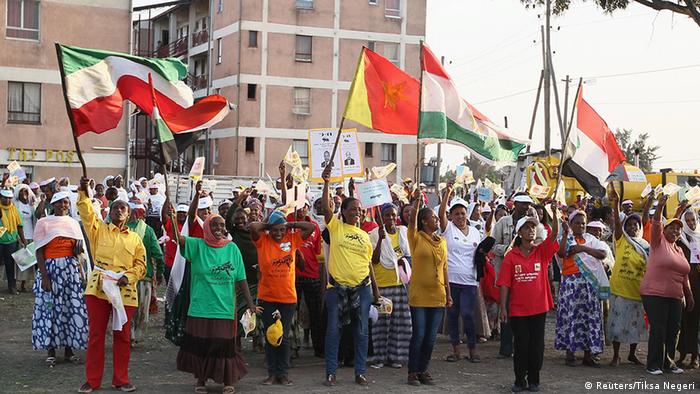 It was not until 2010, after heading the cyber-intelligence service INSA, that Abiy moved into politics and quickly rose within the ranks of the Oromo People's Democratic Organization (OPDO). He was elected to the House of Representatives, and in 2016 he became the Federal Minister of Science and Technology in Addis Ababa. However, he soon returned to his native province of Oromia to take up the position of Head of the OPDO Secretariat.

At the end of 2015, Abiy found himself at the center of a violent dispute over illegal land-grabbing in the Oromia region. Although the controversial 'Addis Ababa Master Plan' was suspended in early 2016, the fallout continues to this day, with a death toll of thousands and many thousands injured.  Abiy — along with regional president Lemma Megerssa — became one of the central figures of a newly awakened Oromo nationalism.

Together, Abiy and Megerssa tried to reassure young people in the Oromia region and listen to their concerns but in interviews with DW, representatives of the Qeerroo, which means youth in the Oromo language, call for action and no more delays."We should not let ourselves be lulled by his appointment now," one of the Qeerroo told DW, "It does not mean that we have now gained freedom, just because he is an Oromo, "We young people want a fundamental change, and if that does not happen we Qeerroo will rise up again."

Mulatu Gemechu, vice-president of the seven-party opposition coalition Medrek, told DW the path won't be easy for Abiy. "There will certainly be many demands from the public now," he said, "And we can only hope that the EPRDF is ready to fulfill them." 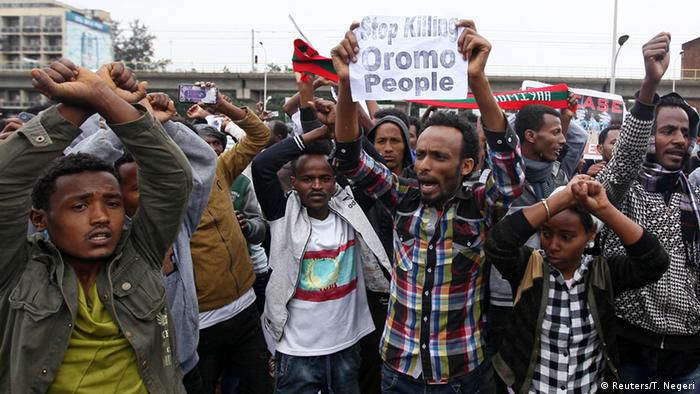 Demonstrators make the Oromo gesture during a protest in Addis Ababa. Although Abiy belongs to the Oromo ethnic group, not all members of the community believe he will make a real difference

Political commentator Mengistu Assefa expressed reservations about Abiy, saying: "I do not think he can bring a big change." What is needed, he said, is a change of government to bring about fundamental political change. "I would like to ask him if he would lift the current state of emergency and bring to justice the brutal armed forces."

Opposition politician from the Arena Tigray party, Abraha Desta, is a bit more optimistic. "It could well be that the new leader [of the EPRDF] manages to expand the political space," he told DW, "This would be very important for the political process in our country."

Human rights groups in Ethiopia and beyond are now calling for a swift national dialogue. Fisseha Tekle, an Ethiopia researcher at Amnesty International, told DW she welcomes Abiy's election, but there is still a lot of work to be done. "The past three years have been marked by uprisings, serious human rights abuses and torture," she said, "We expect the new prime minister to take steps to alleviate these violations."

The fact that Abiy, a married father of three daughters, is an ardent visitor to fitness clubs in Addis Ababa, is likely to serve him in good stead in the coming weeks and months. His academic qualifications should also help — Abiy holds a master's degree in transformational leadership and change and a PhD in conflict mediation.

In an interview in late 2017, the aspiring leader said he was convinced he would be able to win the support of Ethiopian citizens, but that they "expect a different rhetoric from us." According to Abiy, if there is to be political progress in Ethiopia, "then we have to debate the issues openly and respectfully. It's easier to win people over to democracy than push them towards democracy. This can only succeed peacefully and through political participation."

Ethiopia says a state of emergency, imposed after the prime minister stepped down in a surprise move, will last six months. Authorities say the measure is necessary to "protect the constitutional system." (17.02.2018)