Ethiopia has released opposition leaders, journalists and protesters from its notorious prisons. Many have also had the charges against them dropped and are calling for the release of those still in jail. 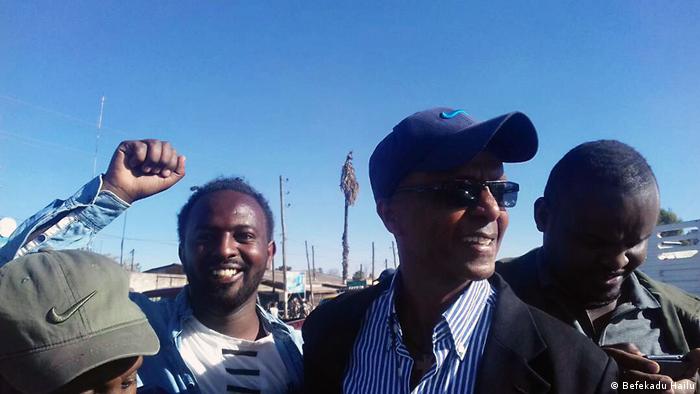 Journalist Eskinder Nega was released after seven years in prison

Journalist Eskinder Nega and opposition leader Andualem Arage walked free on Wednesday, February 14, 2018. A day earlier, Bekele Gerba of the Oromo Federalist Congress (OFC) was set free. They are the most prominent political prisoners to be freed this week, in which the government promised to release over 700 prisoners. 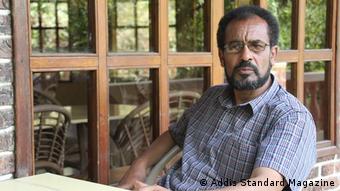 "Many well-known people who fought and struggled for freedom and defended their country are still in prison, still suffering and crying," said Bekele Gerba speaking exclusively to DW after his release. Since the start of the year, Ethiopia's regime has released over 6,000 political prisoners and state prosecutors dropped the charges against many of them. Bekele himself was arrested in December 2015 after mass protests broke out over the use of land in Ethiopia's biggest province, Oromia. He says that authorities did not tell him why he was released, he was just told to pack his belongings.

"You cannot say how many prisoners we left behind, but most of the ones in Ziway prison are political prisoners. The same goes for other prisons," Bekele said. "Two of them were my prison cell mates. So it is hard to be completely happy."

"The struggle must continue. Better things should come for all of us and a bright sunshine of democracy must shine in Ethiopia," opposition leader Andualem told the news agency AFP. Andualem was serving a life sentence on terrorism charges. 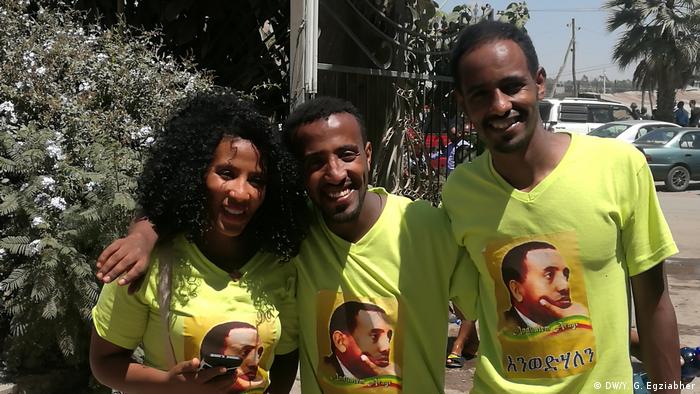 Families and supporters waited outside Kaliti prison in Addis Ababa

Outside Ethiopia, the international community reacted in a positive yet cautious manner. German Chancellor Angela Merkel spoke to Ethiopian Prime Minister Hailemariam Desalegn via phone on Monday, February 12. Her office stated that the chancellor welcomed the fact that Ethiopia had released a large number of political prisoners since the start of the year and encouraged the Ethiopian premier to take further steps in opening the country democratically.

The EU reacted similarly. "The release of thousands of prisoners in the past couple of weeks, including the journalist Eskinder Nega and the leader of the opposition Andualem Arage is a step in the right direction. It's particularly important in view of this year's local elections," an EU spokesperson told DW. "We believe that the grievances expressed by the political protesters should be addressed through an inclusive dialogue with the opposition and all the components of civil society."

The rights group Amnesty International which had been campaigning for the release of the prisoners appealed to the government to change its method of dealing with political critics. "We hope the release of this courageous journalist [Eskinder Nega], along with hundreds of other prisoners, heralds a new dawn in the Ethiopian government's handling of political dissent, a dawn of tolerance and respect for human rights," said Amnesty's deputy regional director Sarah Jackson in a statement.

"The authorities must also take steps to reform the legal system under which arbitrary detentions and torture of dissidents have been allowed to flourish."  A good way to start, Jackson said, would be by reforming the country's anti-terrorism law. "If the Ethiopian government is serious about turning over a new leaf, it must order an impartial and independent investigation into allegations of torture and other ill-treatment of prisoners," she stated. 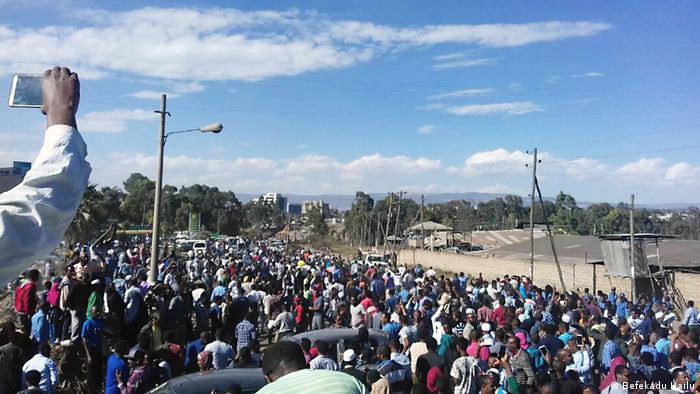 Crowds waited outside the prison awaiting the release

In addition to the prisoner release, state prosecutors also dropped charges against several government critics. Bloggers  Befekadu Haile and Natnael Feleke of the website Zone 9 were arrested four years ago and accused of inciting violence through their work.

"For us, it's good news, for our friends, our family," Atnafu Berhane told the AFP news agency. The charges against Berhane himself were not dropped immediately, but he expects this to happen later this week. Several Zone 9 bloggers were arrested in 2014 for their online activities, and as Atnafu stated, reforms were needed to ensure that critics are not rearrested. "It's not a real change, it's not a real reform. The political space has to be open for all decent voices," he said.

While Ethiopia is known for its harsh crackdown on any sort of dissent and opposition, recent protests have proven more difficult to control. Earlier this week, a three-day strike was called in major towns in Oromia and parts of the Amhara region. Schools, banks and markets remained closed and transport routes were blocked, crippling the country's economy. The protesters' main demands were the release of political prisoners and removal of military personnel from parts of the region.

Major protests over the issue of land initially broke out in 2015. Oromia, the country's largest province, surrounds the capital Addis Ababa and the government had proposed expanding the city's development boundaries into Oromia. In October 2016 the government declared a state of emergency. This gave the government the power to detain people and restrict the right to free speech or to gather publicly, as well as, the right to deploy the army.

Mantegaftot Sileshi of DW's Amharic service contributed to this report.