More than 260 people have been detained after a militia tried to grab power in the Amhara region. Some are questioning whether the prime minister's policies have inflamed ethnic tensions. 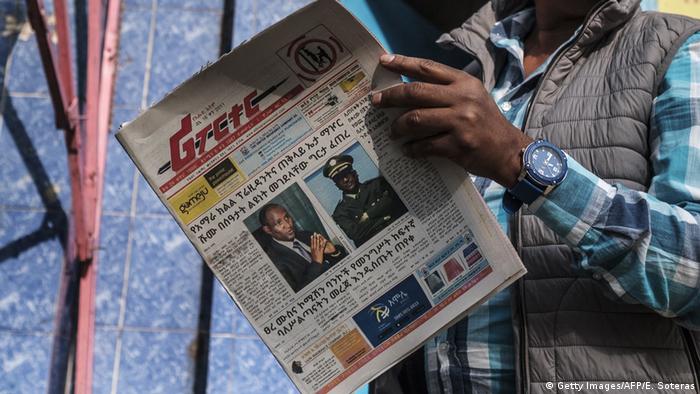 The Ethiopian government confirmed on Friday that more than 260 people have been arrested over a failed coup in the northern region of Amhara. The arrests included the spokesman of a political party that supports the Amhara ethnic group.

The office of Prime Minister Abiy Ahmed announced on Twitter: "212 suspects apprehended in connection with the coup attempt in the Amhara region while 43 individuals detained in Addis Ababa - investigations still ongoing with potential for more arrests."

One of the suspects include Christian Tadele of the National Movement of Amhara (NAMA), party President Desalegn Chane told Reuters news agency.

NAMA was founded in 2018 to oppose the Amhara party, which is in the national ruling coalition. NAMA has been steadily increasing in popularity.

Dozens of people have been killed since Saturday's coup attempt,when a rogue state militia tried to grab power in the regional capital of Bahir Dar. Amhara's president, attorney general, and a top aid were all shot and killed.

Later that day, in the capital Addis Ababa, the military chief of staff and a retired general were murdered in what the government has said was a related attack.

The head of Ethiopia's National Intelligence and Security Service, Adem Mohammed, was appointed as the new chief of staff of the army on Friday.

Since taking office last year, Prime Minister Abiy has released thousands of political prisoners and attempt to open up the political landscape in Ethiopia. He has also reformed anti-terrorism laws that critics and analysts had long claimed were being used as a tool of systematic oppression against opposition voices.

While some have praised his reforms, others claim that they have selectively benefited only some of Ethiopia's ethnic groups and thus inflamed long-standing ethnic tensions.