The Ethiopian government has declared a national state of emergency amid fears that Tigray insurgents are preparing to march on the capital, Addis Ababa. The UN called for an "immediate cessation" of hostilities. 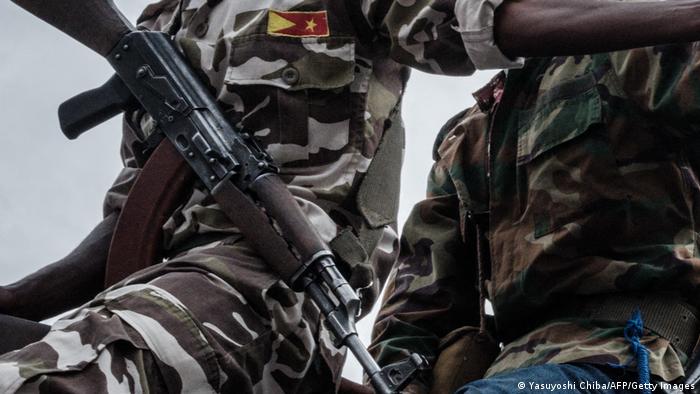 Ethiopia's cabinet on Tuesday declared a nationwide state of emergency after fighters from the northern province of Tigray claimed to have seized two strategic towns, state-affiliated media said.

Fana Broadcasting Corporate said the state of emergency was aimed at protecting civilians from possible atrocities.

"Our country is facing a grave danger to its existence, sovereignty and unity. And we can’t dispel this danger through the usual law enforcement systems and procedures," Justice Minister Gedion Timothewos told a state media briefing.

The state of emergency will have immediate effect and last for six months. It will allow the government to impose a curfew, allow conscription of "any military age citizen who has weapons" or close media outlets believed to be "giving moral support directly or indirectly" to the Tigrayan fighters, Fana said

The measures would first need to be implemented by law. Lawmakers were expected to convene and approve the measures within the next two days.

The insurgent Tigray People's Liberation Front (TPLF) claimed two important towns some 250 kilometers (just over 150 miles) to the north of Addis Ababa, in the Amhara region, in recent days.

The group claimed it had captured the town of Kombolcha on the main road that links landlocked Ethiopia to the port in Djibouti. It also said it had taken the town of Dessie, putting the insurgents in a position to move down a major highway toward the capital.

The government has denied the TPLF claims of its territorial gains. If confirmed, however, these would represent a significant strategic advance in the eleven-month conflict.

The faction has not ruled out marching on the capital, which has so far been spared from any fighting.

Additionally, insurgents from the Oromo Liberation Army (OLA) claimed they defeated government forces in Kemise, which lies even closer to the capital.

On Tuesday, UN Secretary-General Antonio Guterres called "for an immediate cessation of hostilities, unrestricted humanitarian access to deliver urgent life-saving assistance, and an inclusive national dialogue to resolve this crisis and create the foundation for peace and stability throughout the country," according to spokesman, Stephane Dujarric.

Authorities in Addis Ababa on Tuesday encouraged residents to prepare to defend their neighborhoods, amid concerns about a possible advance.

The city administration said in a statement carried by the Ethiopian News Agency that people should register their weapons and gather in their local districts.

"Residents can gather in their locality and safeguard their surroundings," the statement added.

"Those who have weapons but can't take part in safeguarding their surroundings are advised to hand over the weapon to the government or their close relatives or friends."

The statement added that house-to-house searches were being conducted to find and arrest "troublemakers."

US President Joe Biden on Tuesday said that he had decided to cut out Ethiopia from a US free trade program over the government's failure to end a conflict that has lasted nearly a year.

Biden said the war in the Tigray region has led to "gross violations" of human rights.

The program requires countries to eliminate barriers to US trade and investment and to make progress towards political pluralism. However, the sanction would only go into effect on January 1.

Biden's announcement coincided with the US Horn of Africa envoy Jeffrey Feltman telling reporters that the parties to the conflict "don't seem anywhere near" a ceasefire or talks. Feltman called the humanitarian conditions in Tigray "unacceptable."

The envoy also stressed to the TPLF that Washington would take a dim view of it moving on the Ethiopian capital.

Both the US and United Nations say Ethiopian troops have prevented the passage of trucks carrying food and other aid.

Ethiopian military airstrikes on Friday that hit Mekele, the capital of the Tigray region forced a United Nations humanitarian flight to abandon its landing there.
In September, Biden threatened to levy sanctions against Ethiopian Prime Minister Abiy Ahmed and other leaders involved in the conflict.

Ahmed sent troops into Tigray ago to detain and disarm the TPLF. Although he promised a swift victory, the group had regrouped by late June and retaken most of Tigray.