In a game featuring two halves of differing quality, Germany overcame an early red card to defeat Estonia 3-0. Ilkay Gündogan led the second half with a hand in all three goals, but who were the tops and flops? 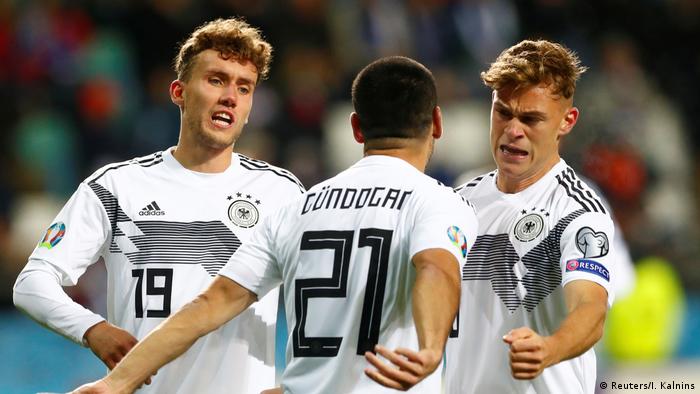 Manuel Neuer: Back in goal after Marc-Andre ter Stegen picked up the gloves in the Argentina match, Neuer had little to do. He made one notable save at the start of the second half, but was largely untroubled. 6

Lukas Klostermann: Didn't see much of the ball in the first half and didn't have much chance to impress going forward as play favored the left wing and the center. Saw a bit more of the ball in the second 45 and was solid enough when necessary in defense. 6

Niklas Süle: A mixed performance from the Bayern defender. He gave a poor pass to Can in the buildup to his teammate's red card, and was unconvincing dealing with Estonia's balls into the box. However, he was strong on the ground and won the majority of his duels. 6

Emre Can: He only lasted 14 minutes on the pitch and takes the unwanted record of receiving Germany's fastest ever red card. Can was handed a hospital pass by Süle but still let the ball run across his body and was caught out. Perhaps unlucky to see red for what was a poor tackle, but nevertheless a disappointing showing. Not ideal following the controversy from earlier in the day. 4

Marcel Halstenberg: Pushed forward at every opportunity, combined well with his midfielders at times and made some important second-half blocks. But overall a pretty quiet match from the RB Leipzig fullback. 6

Joshua Kimmich: Was moved into a center-back role after Can's red card and was the most impressive performer along the back line. Calm in tight spaces, never panicked, and defended well on the ground. Kimmich also still managed to push forward and initiate attacks. 7

Ilkay Gündogan: Took on the majority of the creativity responsibilities from a very deep position but struggled to make an impact in the first half. After the break, however, he was imperious. He scored two deflected goals but his best moment was the assist for Timo Werner. The beautifully lofted ball showed off great vision and technique. 9

Kai Havertz: Didn't get on the ball too much, had a few poor touches, and generally failed to make a big impact. Credited with an assist for the first goal but it wasn't his best match with a few of his passes off-target or lacking the right weight. 6 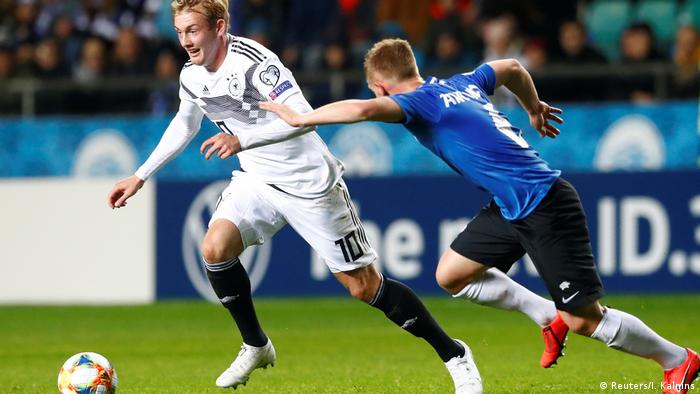 Julian Brandt had a quiet match against Estonia.

Julian Brandt: A very poor first-half showing improved in the second period, much like most of the team. But he was still bullied off the ball too easily, failed to stick a number of passes and was labored in his movement. Produced a nice shot in the second half which was well saved by Estonia's keeper. 5

Marco Reus: Had his moments, often dropping deep into midfield to pick up possession. Hit the crossbar with a free kick just before halftime and produced a nice backheel to set up Gündogan's second goal. 7

Luca Waldschmidt: Despite a trademark effort from range on 24 minutes, which was palmed away, Waldschmidt was largely anonymous. He too dropped deep at times and didn't offer an outlet up front. A tough match for the youngster, who hasn't provided an answer to Germany's striker issues yet. 5

Timo Werner: Came on and immediately provided Germany with an outlet up front with his pace. Executed his goal to perfection and also saw a decent effort tipped behind. 7

Suat Serdar (77th) and Nadiem Amiri (86th) were once again given limited game time to make an impression.

A young Germany side without any of its 2014 World Cup winners faded after a strong first half to draw 2-2 with Argentina. Serge Gnabry and Kai Havertz were on the scoresheet but who impressed and who struggled? (09.10.2019)

On a cold and wet night in Dortmund, an unlikely group of players delivered half a performance for Germany. Head coach Joachim Löw will have been both warmed and chilled by what he saw in the 2-2 draw. (10.10.2019)